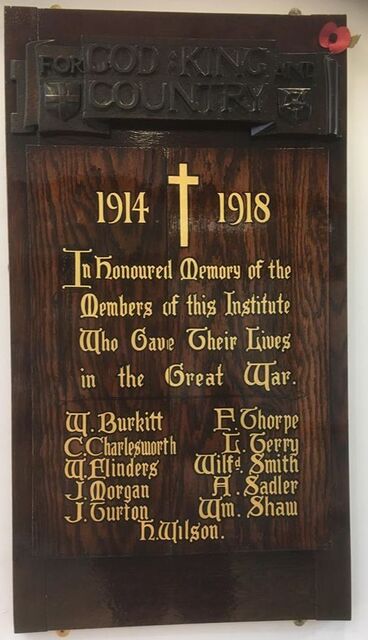 St. Ann's Valley (Library) Centre Nottingham
Hi. Folk's,
just to give you a little bit of back ground information as to how I first started to get involved with the "St. Ann's Church Men's Institute W.W.W.1 Memorial"

.... about three years ago I was contacted by Sue Day (neeDean) a life long St Ann's friend:

" Tony, having a big clear out at home, (altering the garage, lots of stuff going to the tip this afternoon, the builders will be here in the morning) .... including an old Memorial board with names & dates on which is falling to bits and been covered in old blanket's for the past for the past 20/30 years, I think it must have originally come from the Memorial Hall on Ransom Rd......I know that you have a bit of a passion for the old St. Ann's Well Rd...do you want to have a look at it before it goes? "

As soon as I saw it I realised what it was....I remember it being on the wall of our B.B. skipper "Captain Ernie Ley's" office....which was the old St. Ann's Church Men's Institute Room, where they must have all met on a regular basis......and that's where my three year journey started......to find the right public site to hopefully display the W.W.1 Memorial for every one to see & appreciate in time for the The Centenary Celebrations 11/11/18

.......and at last...it will be...in the very heart of St. Ann's, within the " St. Ann's Valley (Library) Centre" ....and with the help & untiring support of Michelle Graley at the Valley Centre who managed to obtain a small council grant to have the memorial fully & professionally restored to it's former glory.

I am delighted & extremely pleased to advice that the Memorial will be officially unveiled & displayed during a special commemoration service tomorrow afternoon at The St. Ann's Valley Centre at  2pm. Wednesday 31st October 2018
Cheers - Tony.

The plaque was unveiled by 101-year-old Hilda Hutchinson who brought along a Christmas card her dad had sent from the trenches in 1918.
the great war (WW1) Centennial Project
Links to conversations in facebook
about this memorial:
link 7/11/2015
Link 18/2/2016
link 30/10/2018
The streets relevant to all names on the plaque.
Links from each name go to full research details.
Hilda the guest of honour as First World War plaque is unveiled
Posted on 31st October 2018 in Armed Forces, Featured, Press Releases
A restored memorial to servicemen from St Ann’s who died in the First World War was unveiled today (Wednesday 31 October) to mark the centenary of the Armistice.
Special guest at the event was 101-year-old Hilda Hutchinson, pictured, with her very own piece of Great War history – a Christmas card sent to her by her father from the trenches in 1918.
The memorial was originally placed in the old St Ann’s Church soon after the war ended to honour local men who lost their lives. It includes a list of eleven names – though of the 2,800 young men from St Ann’s recruited, many in Sherwood Foresters, 1,000 are thought to have died.
The church was demolished in the 1970s but now the memorial has been found a new home at the St Ann’s Valley Centre built on exactly the same site at 2, Livingstone Road.
St Ann’s City Councillors Jon Collins, Sue Johnson and Dave Liversidge have funded the memorial’s restoration from their ward budgets.
The unveiling event this afternoon included a Royal British Legion Act of Homage with a bugler playing the Last Post and a two-minute silence.
There was also the chance for people to find out from library staff how they can start to research their own family history, including any ancestors who may have fought in the First World War, plus Poppy Making with Small Steps Big Changes and the Early Help Team.
Source: http://www.mynottinghamnews.co.uk/hilda-the-guest-of-honour-as-first-world-war-plaque-is-unveiled/ 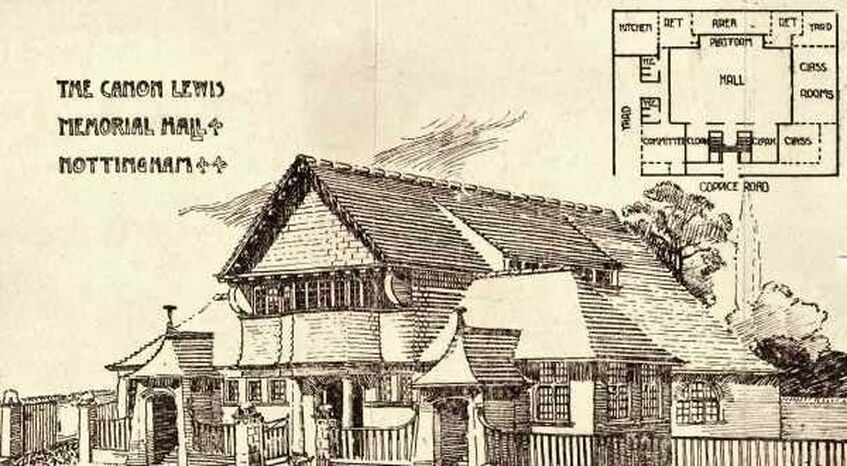 The Men's Institute was part of St Ann's Church, St Ann's Well Road (Robin Hood Chase). The church was consecrated in 1864 but demolished in April 1971. The parishes of St Ann's Church and Emmanuel Church, Woodborough Road, (demolished 1972) were combined together with some of the parish of St Bartholomew, Bluebell Hill Road (demolished c. 1971) as St Ann with Emmanuel church, Robin Hood Chase.The memorial plaque was originally erected in the now disused Canon Lewis Memorial Hall on Ransom Road.

The memorial is currently in the keeping of Tony Miller who is striving to see it moved to a suitable public location.

The names of the men commemorated on the memorial were originally identified from documentary evidence ('St Ann’s Nottingham: inner city voices', Ruth Johns, ISBN 0954312716.). The inscription on the memorial reads 'For God, King and Country. 1914-1918. In honoured memory of the members of this Institute who gave their lives in the Great War (11 names).