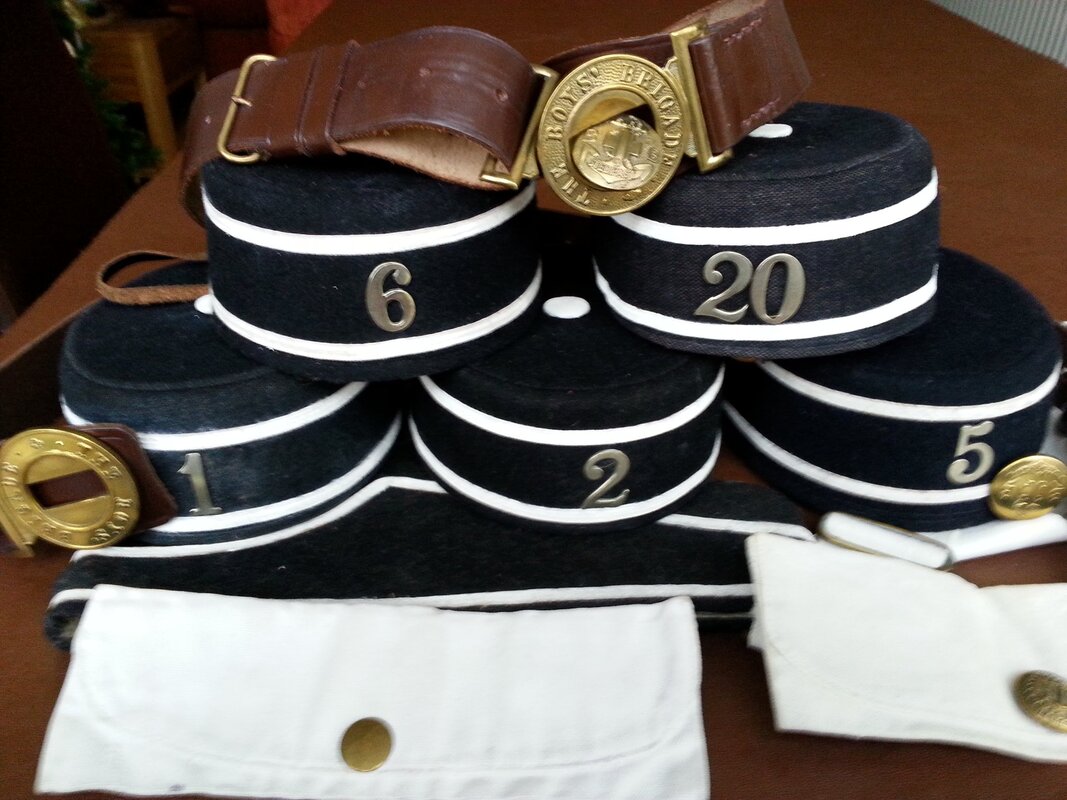 Just reflecting, but these may bring back fond memories for many former St Ann's young boys who were once members of this youth organisation, causing many to take to the streets on some Sunday mornings 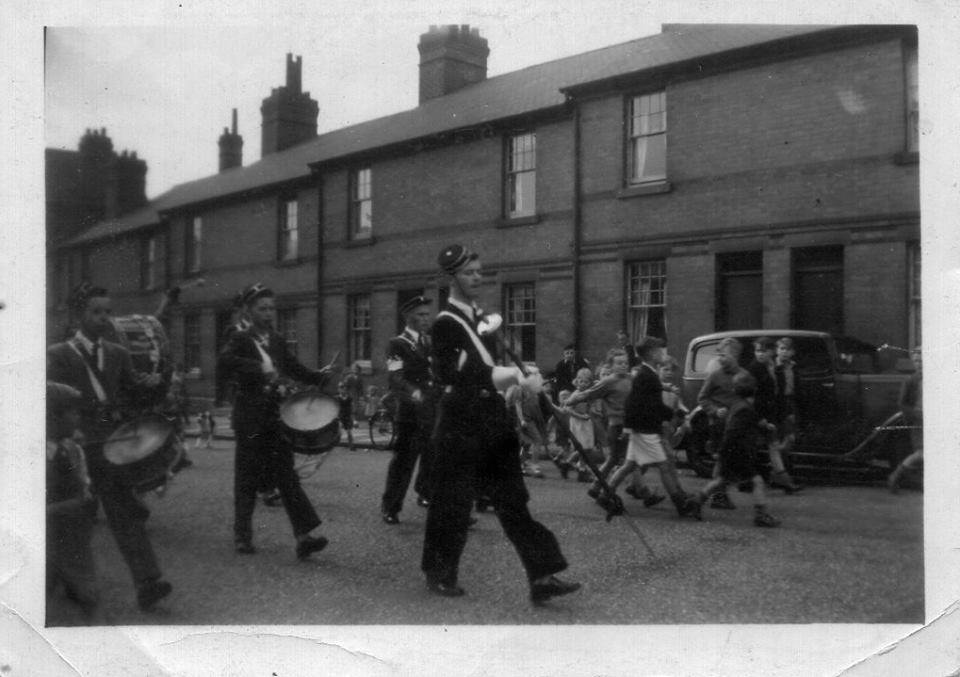 Ransom Rd
"Walked & marched past your old house many a time..... at number 57......what a personal Sunday morning alarm call your family had...being woken up by the B.B. band on a Sunday Morning..." 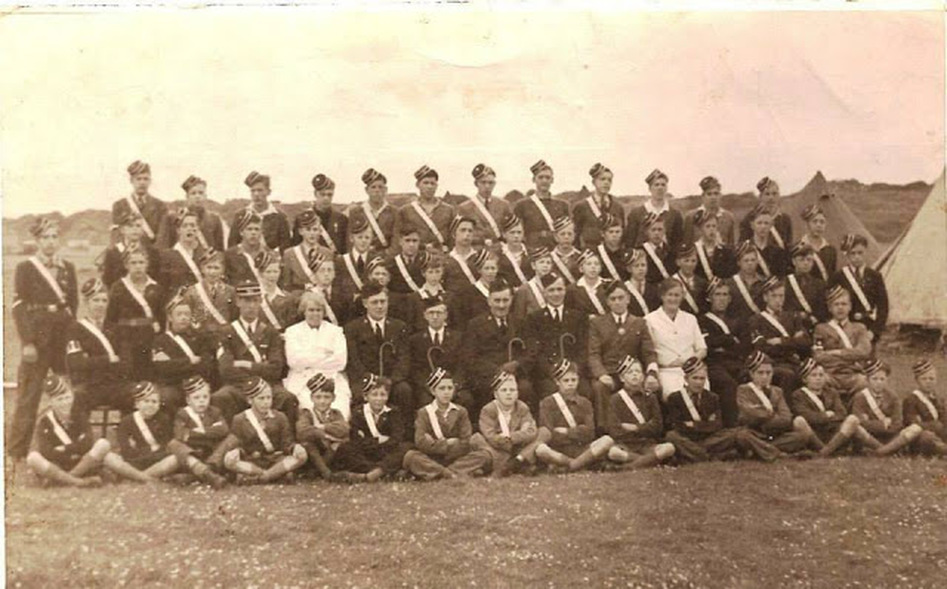 Beq-Steve Clark
I was delighted to see that a blue plaque had been recently awarded to the 20th Company Captain Ralph Carr of the Boys Brigade. I have been researching his background and this has resulted in my first attempt at a blog entry to allow the full collection of pictures and text to be formatted together as a one piece story. Click on the link below to read what I found from the archives. I would appreciate any personal recollections that anyone who remembers him could add. Regards Steve.
Link to Blog Entry 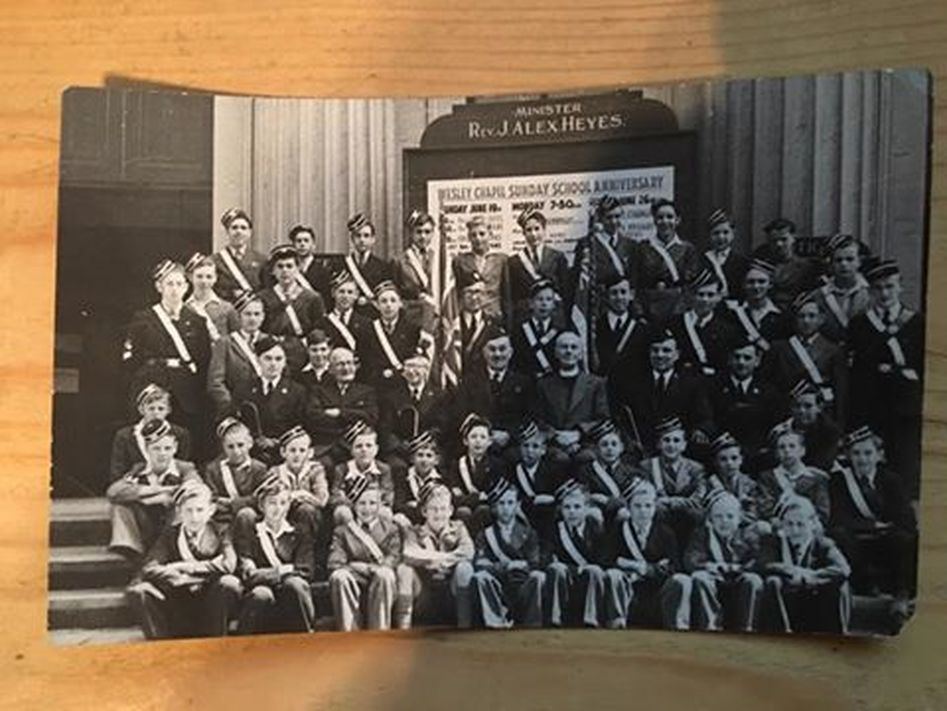 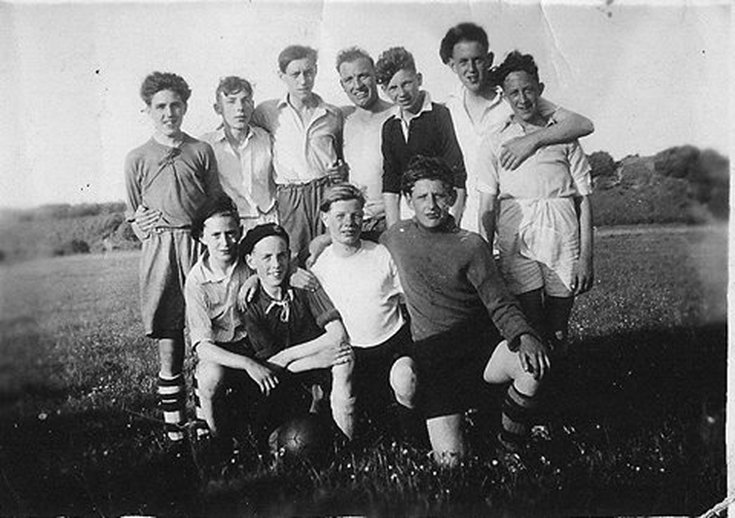 We've been talking on here about the Boys Brigade recently and I am currently preparing a bio of Captain Ralph Carr who set up the 20th Company on Northampton Street. In the meantime, I have just scanned this wonderful photo of a football team from the 20th Company. All good St Ann's lads around the late 1940's probably during camp at Chapel St Leonards. My dad, Gordon Clark is top left (great hair!) and his mate Billy Knight is top right. But is there anyone else in there that might be spotted as a relative? ( Beq-Steve Clark‎) 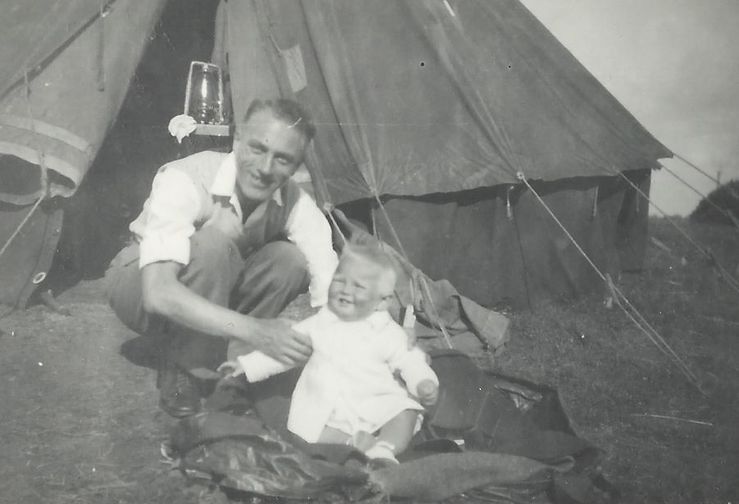 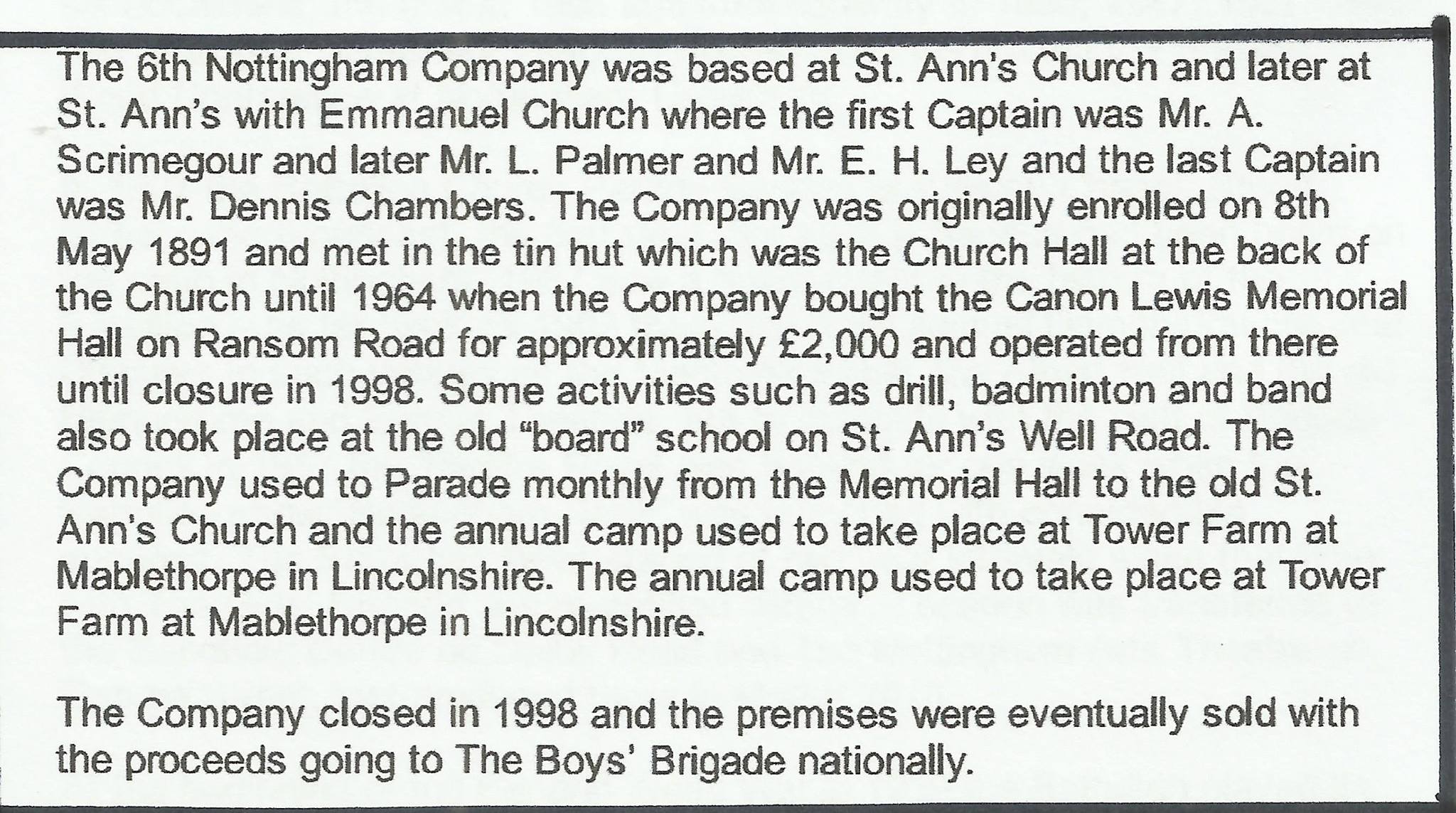 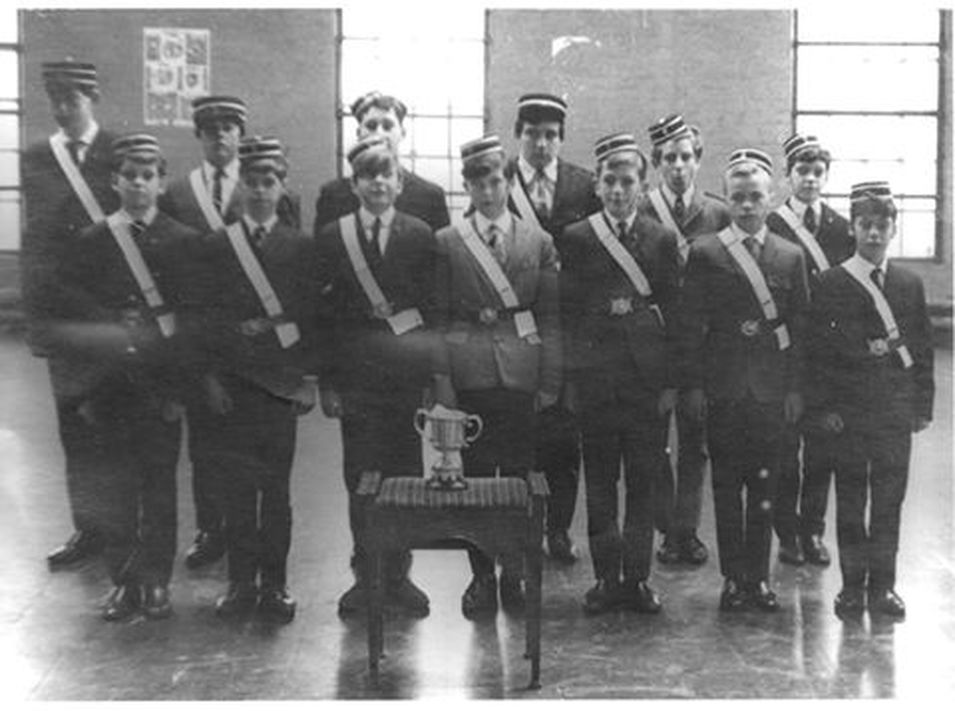 Captain of the 20th Boys Brigade Comp on Northampton St
Nominated by: Tony Miller
Although the 20th Company was regarded as a competitor to the 6th it was a very vibrant company with really good facilities, it was up Northamton St on the left, later it became the Battalion HQ, the building is still there. Len Adey was there Skipper for a number of years, and started the D.of E award scheme with in his company. The first three boys in Nottingham to gain the Gold Award came from the 20th, Barry Booth, Dave Newton and Peter Hill in 1962 I also got to know Len via the award scheme and managed to to achieve my Duke of Edinburgh. Gold Award in '63 presented by Prince Phillip at Buckingham Palace....it was a marvellous day... Sir John Hunt presented my Gold with the Duke at his side...about 5 years later the DoE visited Nottingham and asked to meet all of the Gold Award winners at the Council House to see how we were starting to progress through life and how the award scheme had helped us individually. A great experience for me personally... and Len Adey helped to make it possible for me and lot's of other young men through the Boy's Brigade. 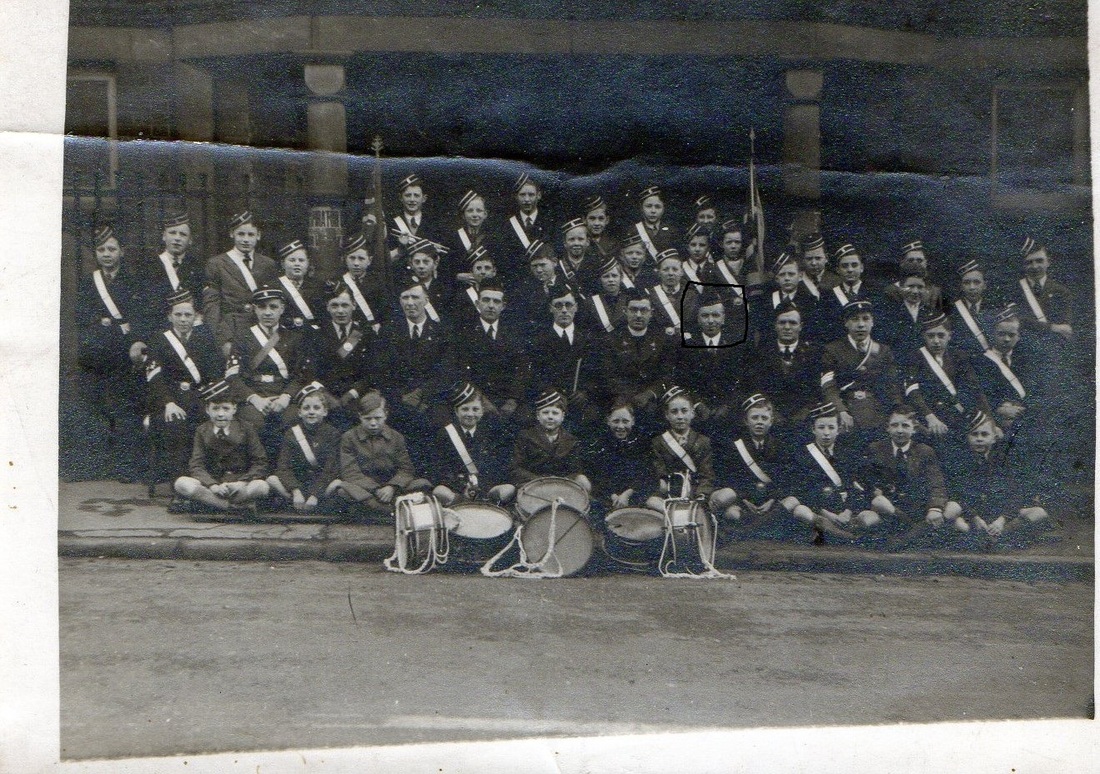 The Company was originally enrolled on 8th May 1891 and met in the tin hut which was the Church Hall at the back of the Church until 1964 when the Company bought the Canon Lewis Memorial Hall on Ransom Road for approximately £2,000 and operated from there until closure in 1998.

Some activities such as drill, badminton and band also took place at the old “Board” School on St. Ann’s Well Road.

The Company used to Parade monthly from the Memorial Hall to the old St. Ann’s Church

The annual camp used to take place at Tower Farm at Mablethorpe in Lincolnshire.

Tony Miller said: " Dennis Chambers - he was the last and final Captain of the 6th. before the company sadly closed down. I was asked by his family to give a eulogy at his funeral on Dennis's life and service in the B.B. it was indeed a great honour for me to do this...but as you can imagine quite a task....there were a lot of old boys & good friends who came to say there final goodbye at the service, to a great guy & happy times..... Incidentally the £2,000 that was also mentioned to buy "The Canon Lewis Memorial Hal" for St. Ann's B.B. was donated by Nottingham Forests F.C. Chairman's Charity via. Fred Reacher for "Services to the community"....".Come on you Red's"......." 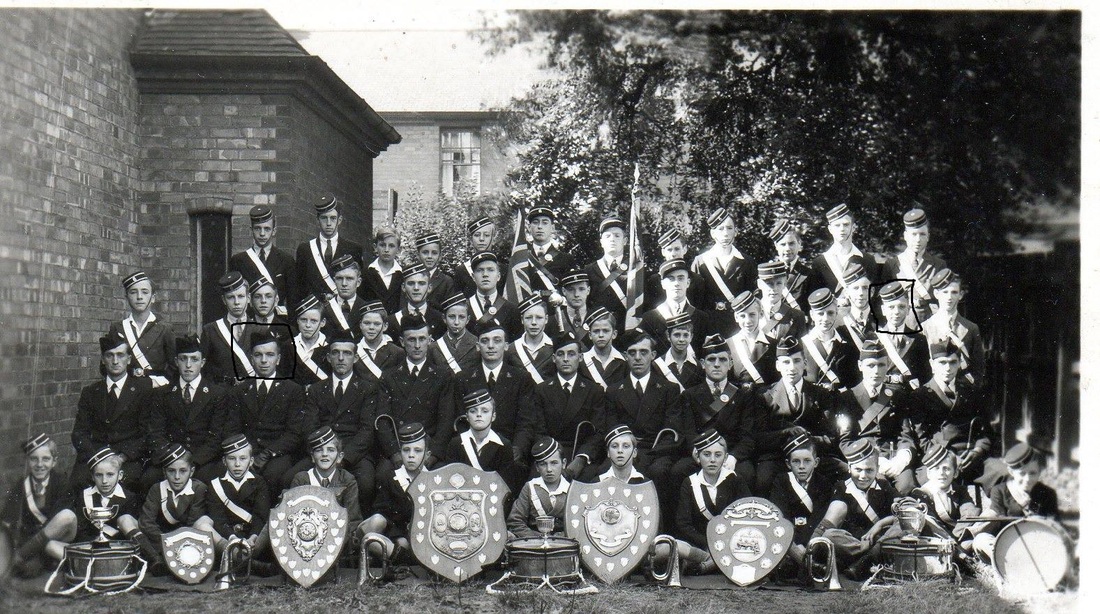 Susan Frost: My Dad Stan Frost & his older brother Frank in the Boys Brigade. My Uncle Frank had a long connection with the BB. He was a builder and owned Frost & Leatherland, they were on Dame Agnes St. then moved to the bottom of Donkey Hill, 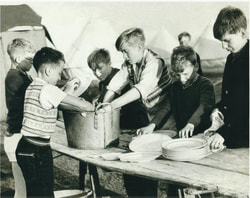 6th. "Boy's Brigade" (St. Ann's) Comp. Annual camp at Mablethorpe circa. early 1960's group of St. Ann's boy's on Fatigue Duties.....Washing up. Some names left to right.. Geoff Wooley, (? very fashion conscious boy??? in striped jersey, snake belt, and a zip on his jeans pocket) Mick Symington, Dave (Buzz) Roberts, our very own Paul Key who very kindly donated the picture, and tall lad on the right blazer on and tea towel in his hand....at the ready.......great picture Paul many thanks. Can any one help with the missing names? 3p Hot Blackcurrant Drink voucher at Flo Wood's for any one with a name........Cheers Tony. 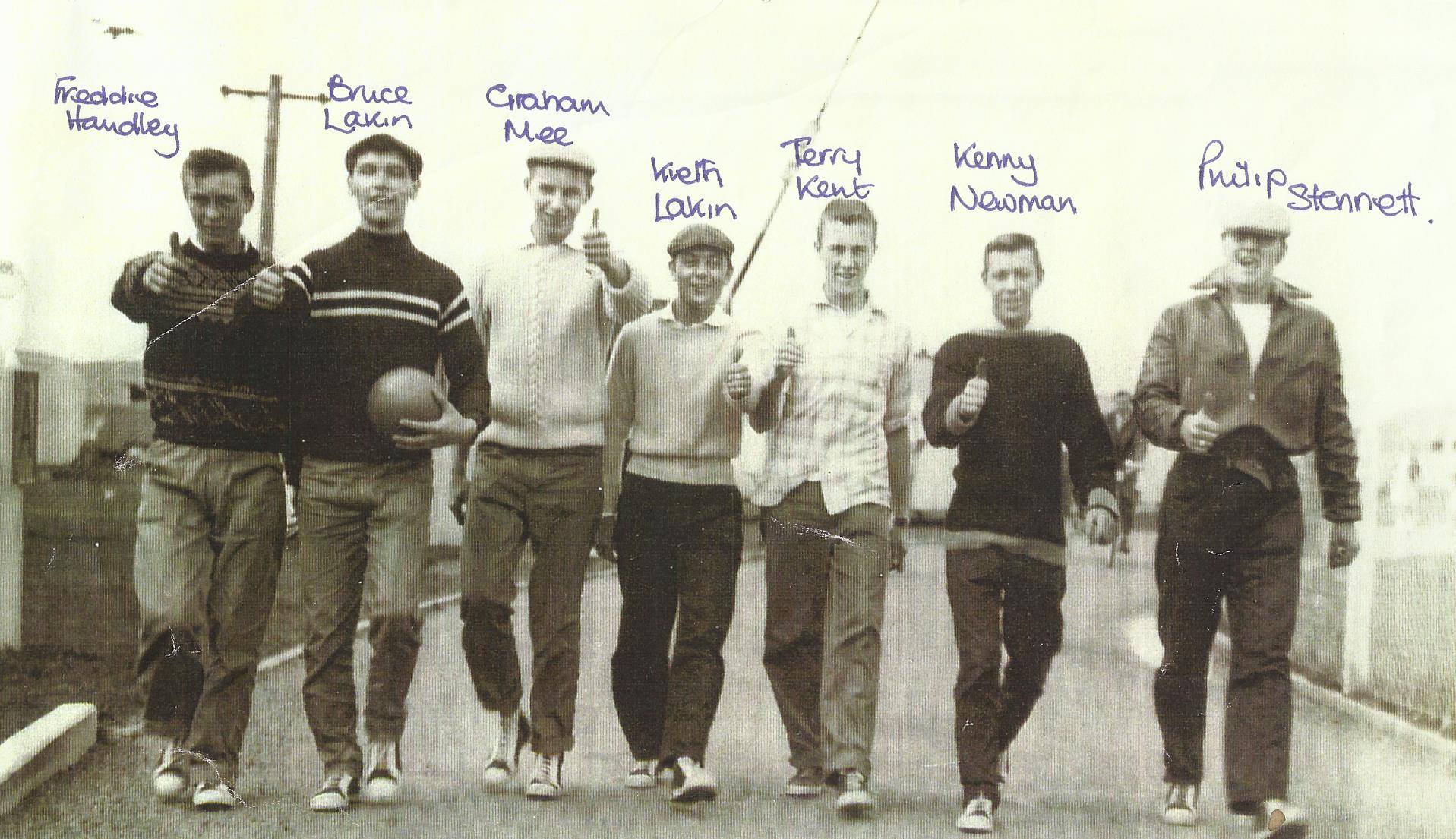 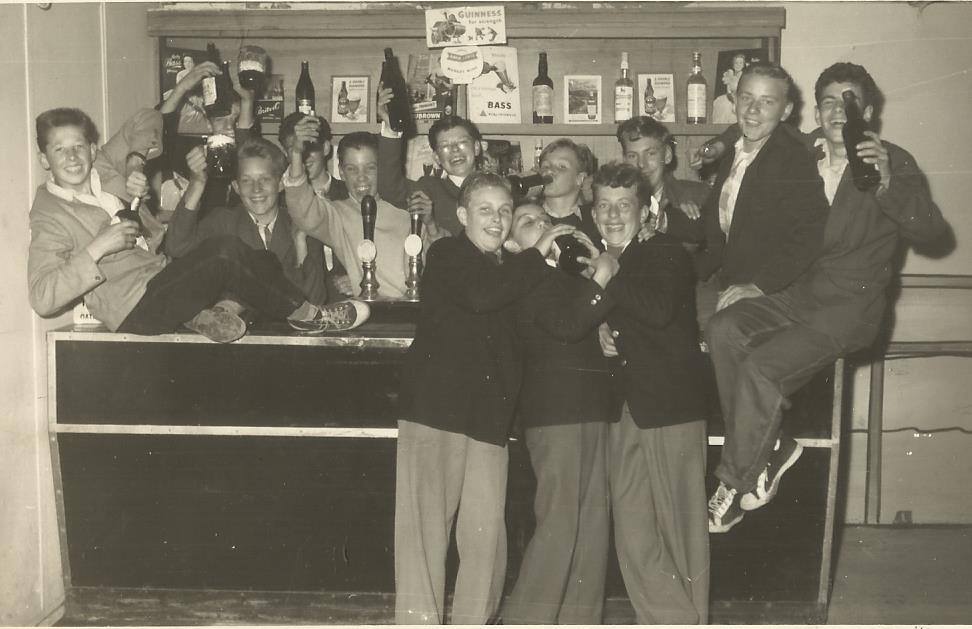 
Only five years after its founding in Glasgow, The Boys’ Brigade came to Nottingham. The first Company was started at St. Andrew’s Church in October 1888..

In May 1892 it was decided to form a Battalion in the City and by the end of the first year 10 Companies, 42 Officers and 450 boys had been enrolled. By 1900 the number of Companies had doubled and there were 85 Officers and 1158 boys.

The Company was originally enrolled on 8th May 1891 and met in the tin hut which was the Church Hall at the back of the Church until 1964 when the Company bought the Canon Lewis Memorial Hall on Ransom Road for approximately £2,000 and operated from there until closure in 1998.

Some activities such as drill, badminton and band also took place at the old “board” school on St. Ann’s Well Road.

The Company used to Parade monthly from the Memorial Hall to the old St. Ann’s Church

The annual camp used to take place at Tower Farm at Mablethorpe in Lincolnshire.

Further information about the Nottingham Boys Brigade In 1907 the 2nd Nottingham Company was formed in connection with the Dakeyne Street Lads’ Club in Sneinton by another great personality, Oliver W. Hind. His great service was perpetuated by the renaming of the Club as the “Oliver Hind Boys’ Club”. The Headquarters of the Company and Club was transferred to new purpose-built premises in 1970 but the Company no longer operates. Its familiar name of “Dako” is still used.

The Battalion was visited by the Founder of The Boys’ Brigade, Sir William A. Smith, on three occasions: at the Battalion Annual Demonstrations in 1903 and 1912 and again in 1913 during the Battalion 21st Celebrations when the old Colours were Trooped and new ones handed over by the Lady Mayoress of Nottingham.

In 1911 the Battalion took part in the Coronation Day Parade along with other organisations and afterwards were given a lunch at the Empress Skating Rink.

In 1927 the Battalion Church Parade Service at Wesley Chapel, Broad Street, was broadcast, the first time that such a Service had been heard on the radio in Nottingham. 1957 saw a major event in the history of the Battalion – as far back as 1903 there had been Annual Demonstrations and Displays in such venues as the Mechanics Hall, the Albert Hall and the old Hippodrome and Empire Theatres, but to coincide with the visit of Brigade Council in 1957 the Theatre Royal was booked for one week when the Battalion show “Nottingham Rock” was launched with considerable success. The Show has been staged at two year intervals since that time being transferred to the George Street Theatre and latterly the Sandfield Centre on Derby Road last produced in 2011 with The Girls’ Brigade and entitled “Shine”.

At the beginning of the Second World War in 1939 the Battalion played its part, along with other boys’ organisations, by maintaining a Boy Messenger Service under the City Air Raid Precautions Scheme. The following year a Squadron of the A.T.C. (No. 1059) was formed within the Battalion with seventy members.

In 1992 the Battalion celebrated its Centenary included in which was the hosting of Brigade Council at Nottingham University and events at The Royal Concert Hall. Earlier that year the premises on Northampton Street had been gutted by an arson attack but under the leadership of Roy Wadd as President the Battalion rallied and the full celebrations went ahead.

In 2008/2009 the Battalion celebrated the 125th Anniversary of the founding of The Brigade including the planting of 125 trees in Rushcliffe Country Park on 11th October 2008 and a Battalion Camp at Beaumanor Hall in Leicestershire in April 2009.


ORIGINS OF THE BOYS BRIGADE

William Smith, a teacher at a Glasgow Sunday School, had found many of the boys in his Sunday afternoon classes troublesome and unruly.  Much of his and the other teachers' time was being wasted just trying to keep order.  He came to the conclusion that the usual Sunday School format was not suited to these boys.  As a consequence, he proposed to form a special group for them, which would be known as the Boys Brigade.  A variety of activities were to be offered which he hoped would engage their interest, inculcate good habits, and at the same time provide a platform for Christian teachings.  William Smith invited his Sunday School boys to the first meeting of his Boys Brigade in October 1883.  After some initial setbacks, and with the help of his friends John and James Hill, William Smith began to succeed in his professed aims.  He never envisaged anything wider than the group at his own church, but word began to spread of his successful venture and similar groups began to be formed at other churches.  William Smith could see the benefits of a corporate identity and soon called a meeting of those in charge of these other groups.  Together they drew up and agreed upon a constitution for the Boys Brigade.

Churches, the length and breadth of the British Isles, were soon forming their own companies and it became obvious that some one was needed to help run the movement in a fulltime capacity.  In 1887 William Smith was appointed the first Brigade Secretary. The turn of the century saw the formation of other similar youth movements, the Church Lads Brigade, Jewish Lads Brigade, Catholic Lads Brigade, and the Boys Life Brigade.  Organisations for girls were also started.  The Girls Brigade (Ireland) was formed in 1893 and in 1900 the Girls Guildry was started in Scotland.  Three years later, the Girls Brigade in England came into existence.  The Boy Scouts were comparative latecomers to the field of youth movements - the first groups forming in 1908.

Five years after its inception in Glasgow, the Boys Brigade gained a toehold in Nottingham with its first company based at St. Andrew's Church on Mansfield Road.  By 1892 there were sufficient companies to warrant their grouping together in a Nottingham Battalion.  In 1893 the Boys Brigade arrived in Lenton with the formation of the 15th Nottingham, based at No.2 Digby Street, New Lenton and attached to the Parish Church.