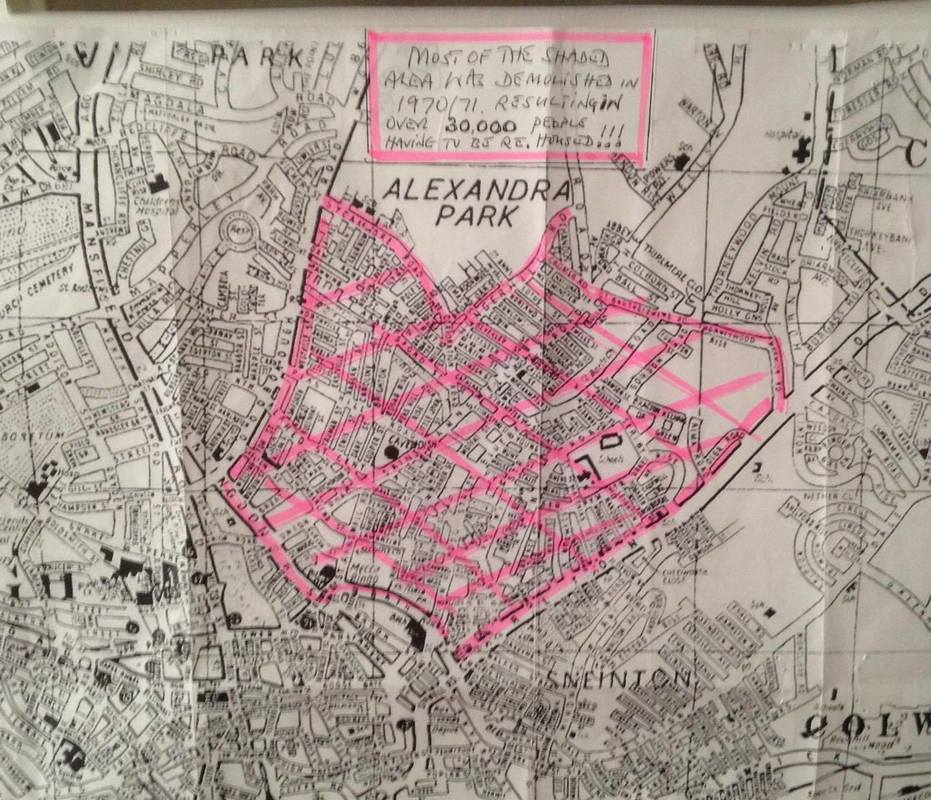 ​
"Differing views of the lost world of St Ann's before mass clearance"
​Published Nottingham Evening Post 13th April 2013.
"St Ann's Well Road, the heart of the new and old St Ann's, is steeped in history. It takes its name from an ancient track which led from the borough to the well. A chapel had been built there in 1409 and the water of the well was said to have healing powers.

A west-to-east road in the central area was named Alfred Street, divided into three parts – North, Central and South. Radiating from these routes in a grid pattern were streets of terraced houses.

Factories, workshops and other industrial buildings were built alongside the houses so that workers did not have far to travel. By the end of the 19th century the whole area was virtually filled with high-density housing to form a self-contained suburb with churches, chapels, schools, shops, banks, pubs and even a railway station on the Nottingham Suburban line.

Ten thousand houses were packed into St Ann's by 1890s and two-thirds of them had no hot water and three quarters no bath.

Few had gardens and there was only a small park, adjoining the Bath Street burial ground. But there was some open space – notably the Hungerhills, where allotment holders grew vegetables and roses. The gardens became famous with an annual St Ann's Rose Show.

By the beginning of the 20th century, trams were running through St Ann's, later to give way to trolley buses. The 1920s and '30s saw the opening of cinemas and dance halls.

When the city council resumed slum clearance in the 1950s, St Anns was not one of the first areas to be tackled. Its turn came in 1967 with the first clearance order. When Radford was redeveloped in the late 1950s, the policy was to demolish unfit houses but leave the more expensive pubs and industrial buildings.

In St Ann's a much more radical approach was adopted, razing vast areas to the ground. Although the main thoroughfares were retained, many of the old grid-plan streets disappeared.

Compulsory purchase orders were introduced in 11 phases over a period of six years. Covering an area of 264 acres, the orders involved 9,635 properties worth £5.25m. The project involved the rehousing of 30,000 people and it was not possible, especially in the early stages, for the uprooted to be rehoused in the St Ann's area. They were moved to other council estates throughout the city.

Critics argued that some of the older houses could have been retained and improved. An organisation called Satra (St Ann's Tenants' and Residents' Association) became an important voice for local people.

Many residents, especially those who had lived in St Ann's all their lives, regretted the loss of the neighbourliness which had existed in the closely-packed streets.

Others welcomed the move from cramped houses without modern amenities to new ones with central heating, gardens, bathrooms and space for refrigerators and washing machines.

St Ann's, like other Nottingham's inner-city areas, suffered some of the national problems of the latter part of the 20th century.

Increased crime, violence, drug taking and dealing were probably no worse in St Ann's than some other areas but because of the physical layout of the estate, the city council stepped up security measures in the past two decades.

In 2004, scores of Bygones readers wrote to them about their memories of St Ann's Well Road.

Here's a selection of the views and anecdotes expressed:
Marian Browne, who was born at the St Ann's Dairy, in St Ann's Well Road, said people went to the premises in the 1920s to buy one egg or a pennyworth of tea.

She recalled: "In the 1930s a trolley bus would run daily in the late evening called the City Postal. You could post your letters into a box situated on the platform at the rear of the bus."

Mr B Bruton said: "I can remember the public baths at the bottom of Calcutta Street. I used to use them as we had no bathroom."

Mrs Peggy Carnill, aged 92, recalled St Ann's Well Road in its heyday. "You could get everything you possibly wanted," she said.
She harked back to the time when pubs with names like the General Havelock and the Oliver Cromwell, and all sorts of shops, vied for trade.

The late Bygones feature writer John Brunton wrote in 2004: "St Ann's wasn't prosperous. But it was full of life."
He added: "The new St Ann's would emerge, rebuilt and vastly different to the way it was. Many, now, would say the soul flew out with the brick dust left by the demolition men."

Cynthia Simpson (nee Hill), of Waddington Drive, Wilford Hill, was happy to share her many St Ann's memories. Her parents, Sylvia and Norman Hill, kept two greengrocery shops in St Ann's Well Road.
"I remember my mother telling me about the late Dennis McCarthy and his family who came to live just down the road from us. Apparently they were evacuees from London.
"His father was a painter and decorator and was often seen going up and down with his ladders, accompanied by Dennis (Dennis did very well for himself and was very popular on Radio Nottingham).
"Just down the road from us lived Barry Howard, who appeared regularly in the BBC TV comedy Hi De Hi. His father kept a butcher's shop, and we used to play together."

But John Woodhouse, who was born in Union Road, St Ann's, in 1944, said: "No, I don't agree they were the good old days. As a kid I felt constantly frightened, cold, hungry and thirsty, and I wouldn't want those days to return."
John, who now lives in Cherrywood Gardens, Porchester Road, added: "Most people were moved out during the demolition of St Ann's and many live around me today. One thing I did learn was the way to survive. As I gazed down Union Road, I wondered how many of the old folk have also survived."