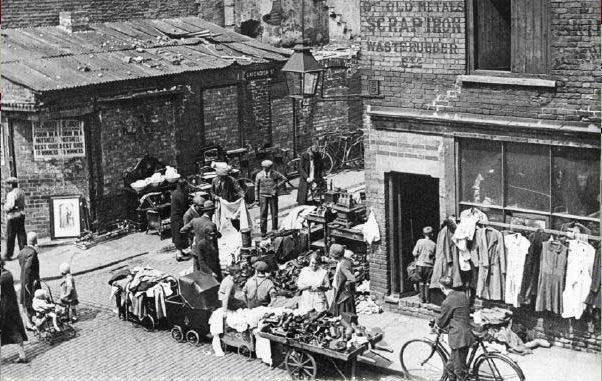 The street running up the middle, where more of his wares were on display, is Cavendish St.

There was a Jackie Pownall's on the bottom of Gordon Rd close to where I lived.

Oh I remember taking woollens to him for my mum.

We took all our old woollens and rags to him.

Yes, all the rags went to him.

We would take our rags to a yard on St Ann's Well Road in a pushchair and they would put all the rags on this big old set of scales to weigh it!  Back in the day......old coats would be stripped into pieces by my mama and then she would make rugs out of them!

I grew up with Mick, John Pownall they were Albert’s boys along with sister Jean (Manvers/Colwick Rd)
Albert Jackie, Edgar Pownall were I believe brothers

When she was particularly on a roll, we'd have to make sure our best coats weren't taken otherwise they'd have been stripped too!

You got more for your woollens than you did for your mixed rags. Remember pushing an old pram up Alfred St South to get there. At the Carlton Rd end somewhere

You are right there about the woollens being more valuable, but my mama would undo all the woollens and knit them up again into some other creation. She was a thrifty ol gal my mama!

My mama Doll taught me how to knit, so had just the best teacher! She could turn nothing into something but then she was a Senty gal!

My dad went to school, Bath Street, with Jackie Pownall & one of the classmates was Cyril Stapleton. The photo is in Picture the Past.

I think he also had a yard on Fisher St off Beaconsfield St Hyson green.

Yes, the one we went to was at bottom of Alfred, Street, and in the late 40’s rabbit skins, penny each one

Oh remember Jackie’s well , ‘is brylcreemed dark wavy hair , tweed jacket and big boots , the yard was just up from Beverley St near Bendix launderette and Howard's the butchers ..cobbled and   something you'd see in Dickens Fagin  ... Rags a mountain high and his weighing scales , junk outside and up in the rafters! My brother was a bit of a collector - to make some spending money remember he got clothes and scrap bits and took it there when he was quite young , no asking for ID then !! Oh another world hey!!

Used to be a Pownall`s on Bath Street. Pots, Pans and all sorts of household stuff even kitchen sinks if I remember rightly. The GPO acquired the land and built on it. Just opposite the rest garden where Bendigo`s monument lies. (I think)

… that was Albert and sons John, Michael, store.

My cousin and I took rags there during the war years

Yes, my dad remembers the army surplus store on Bath Street, as well as the other locations, but also another son not mentioned yet, Vic Pownall. I think he may have been the youngest, but he lived just a few houses away from us on Oakdale Rd in Carlton, where we moved to in the  1980s. At the end of Oakdale Road is the Elwes Pub and before the new estate was built behind it, a Pownall had a house there with a bear in the garden, which you could see from the pub! Yes, a bear! Quite a family.

It got loose and ended up getting shot dead didn`t it Steve?

Never heard of Vic. John, Michael ,and Jean ,were the only children of Albert and Gladys Pownall I knew of,
I had my 15th birthday party at the big house on Oakdale Rd mick threw it for me we were very close growing up ,he later married a friend of mine Rita Pike off Cardale rd, they then had office equipment building on castle blvd which I believe Rita and their two children still run,
John married Madge? He bought the old police station on Bath St and made it a bookies’ then had a pub in Cotgrave, The Shepherd I think that's was the name
John died age 47 then Mick died age 50/51 just Jean left.

Tickets yes Trent lane next to railway lines we used to go there,

Pownalls moved into the old Price’s bakery at the bottom of Gordon Road and Clarence Street, we used to take rags so we could go to the Saturday morning pictures.
This is Jackie Pownalls 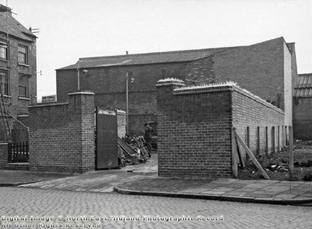 Nottingham Evening Post 3rd March 1948
ONE SHILLING RETURN Having read the letters in the Post” about the old times, I wondered if you had any record of the times when old .lacky Pownall, of Sneinton Bottoms, used to run shilling trips to Cleethorpes and back by train. SNEINTON. [The trip., referred to took place between 50 and 55 years ago. We are informed that Jacky Pownall originally arranged them for the benefit of old people.—Ed.. N.E.P.'’ 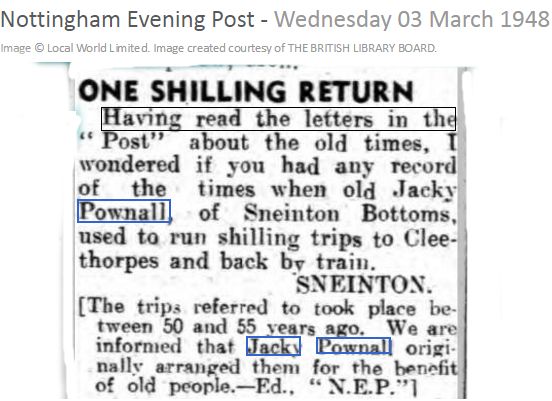