The fate of the WW1 memorial plaque:
Click here for details
​ 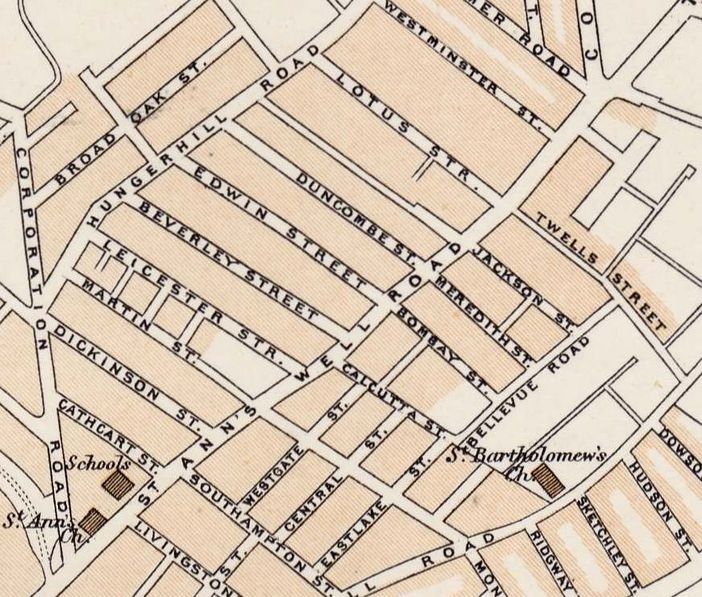 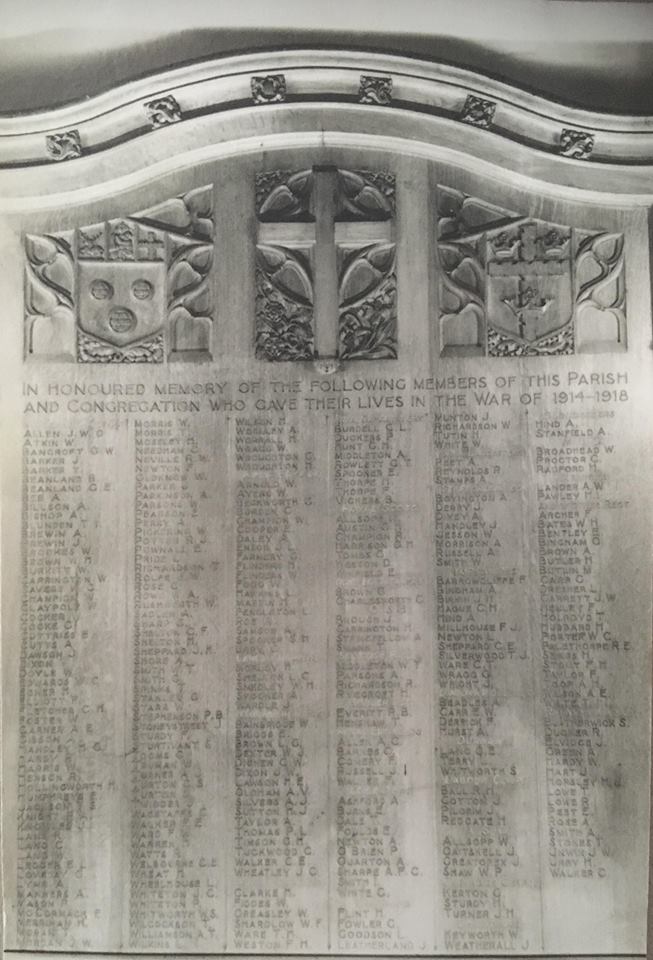 It was designed by Thomas Chambers Hine and Robert Evans.
​ It was consecrated as a chapel of ease in the parish of St. Stephen's Church, Sneinton by The Rt. Revd. John Jackson the Bishop of Lincoln on 6 May 1868.
The chancel was damaged by enemy action during the Second World War.
St Bartholomew
​Gordon Road
St Bartholomew’s Church, Bluebell Hill, had a comparative short life. A temporary iron church was erected on the site in 1887, and a permanent church opened in 1902. The iron church remained as a church hall.

The church was built on open land, but it soon became surrounded by new housing. The Roll of Honour produced just after the First World War is evidence of the large number of the men in the community who served in the conflict. It contains 704 names, all members of the parish and congregation. In total 136 were recorded as killed.

The church was closed and demolished in 1971 as part of a wider demolition project in the area.

More on this church here: http://southwellchurches.nottingham.ac.uk/nottingham-st-bartholomew/hintro.php
st catherine's
St Ann's Well Road
The site on which St Catherine’s church is located was, until 1834, a green field site on the very edge of the city. Opposite the church site was a small cluster of streets of mainly ‘back to back’ houses. An old pottery occupied land adjacent to the church site.
The building was dedicated by Bishop Christopher Wordsworth of Lincoln on 22 January 1884
A comprehensive history of St Catherine's can be found here: http://southwellchurches.nottingham.ac.uk/nottingham-st-catharine/hhistory.php
congregational,
​st anns well road
More about this church
christ church
​peas hill road
A Sunday School was established from High Pavement Chapel in the St Ann’s Well Rd district in 1860. In 1863 the foundation stone was laid for a new church, on the corner of Peas Hill Road and Raglan Street in St Ann’s. The church opened on 16 June 1864 as a daughter church of High Pavement.
However, the church always struggled with debt, and even as late as 1927, High Pavement Chapel were working to raise money to clear the debt of the church.
Services in the church ceased after February 1932, but the Sunday School continued until 1935. The church has been demolished.
source: https://en.wikipedia.org/wiki/Christ_Church,_Peas_Hill 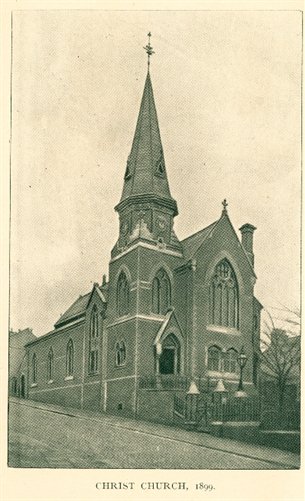 st marks
St Mark’s Church was built on a green field site bordering Windsor Street (now Huntingdon Street).
For a comprehensive history of the church - http://southwellchurches.nottingham.ac.uk/nottingham-st-mark/harchlgy.php
st augustine's
​Woodborough Road
The church was built in 1923. It was designed by John Sidney Brocklesby
St Augustine’s Church was never fully completed (because the estimated price doubled and Brocklesby was sacked) leaving it with a slightly odd appearance with one round tower and one square.
credit  ​http://mapperleyandsherwoodhistorygroup.co.uk/the-history-of-anglican-parishes-in-nottingham
kings hall
​st ann's well road
st emmanuel
​Woodborough Road
Built 1885
Designed by Watson Fothergill.
Demolished in 1972
One of the vicars, Rev Llewellyn Gwynne, was previously curate at St Andrew’s
​and went on to become Bishop of Khartoum and later Bishop of Egypt and Sudan. 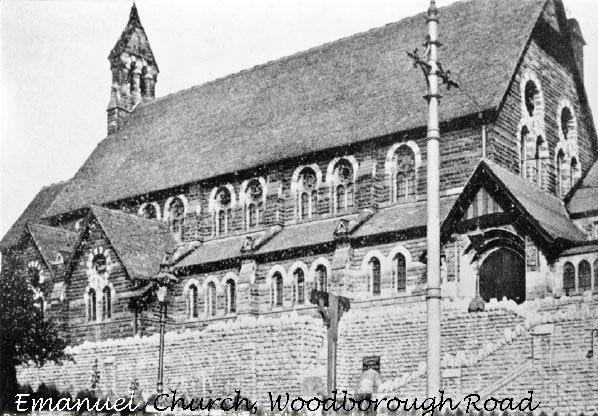 st andrew's church school
​Alfred St
The building was also known as St Ann's Parish Hall and stood near the top of Alfred St North, opposite The Mechanics Arms at the bottom of Vicarage St.

2019 the building still stands - it was occupied for many years by Playworks who organised play sessions for youngsters to bring communities together.  Due to lack of funding Playworks went into liquidation 24th April 2019 and has closed down. 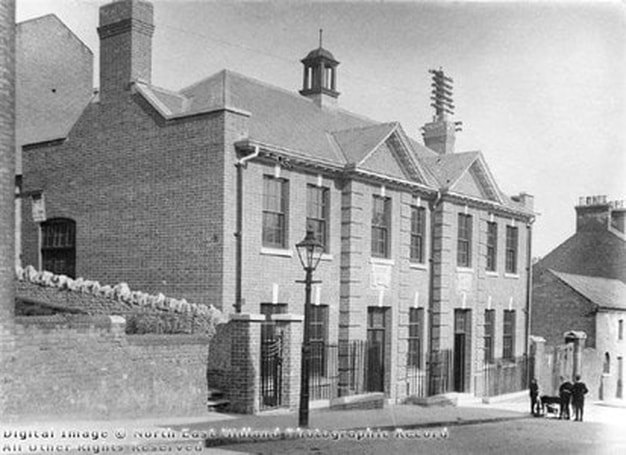 Ged Webster Tony-Ann Miller corner of Alfred st and Banger st typical church school built of stone looking like miniature church ,the teachers that I remember are Miss Blakey Miss Rouse Miss Singleton head mistress.  I  don't suppose there are any early photos of the classes , I am talking late 40s I have no photos of me before 1954 sad isn’t it
Tony-Ann MillerGroup admin Yes it is Ged, never heard of the school sorry to say....any one else have any further info ? Cheers Tony. 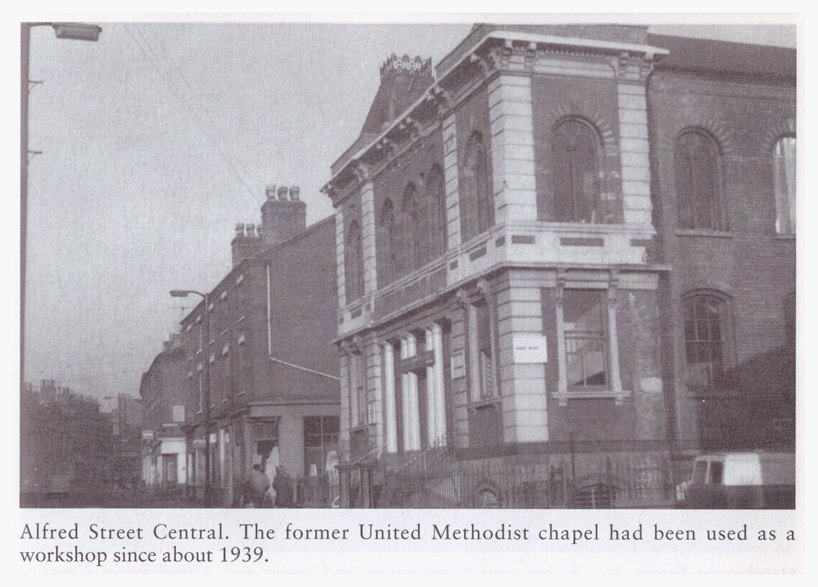 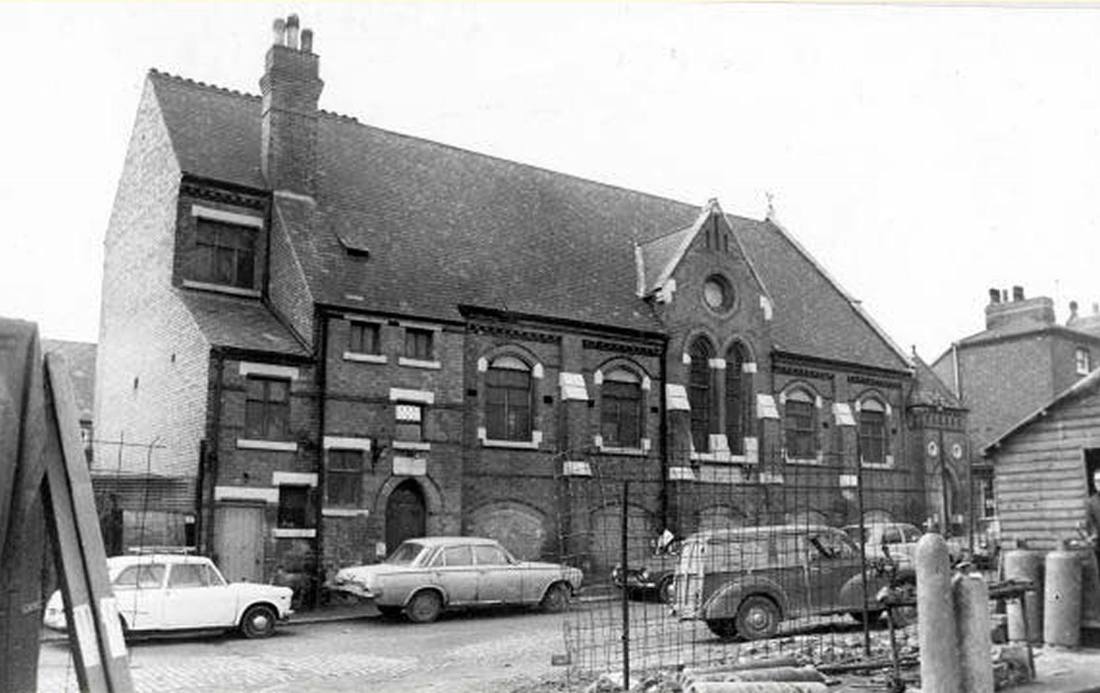 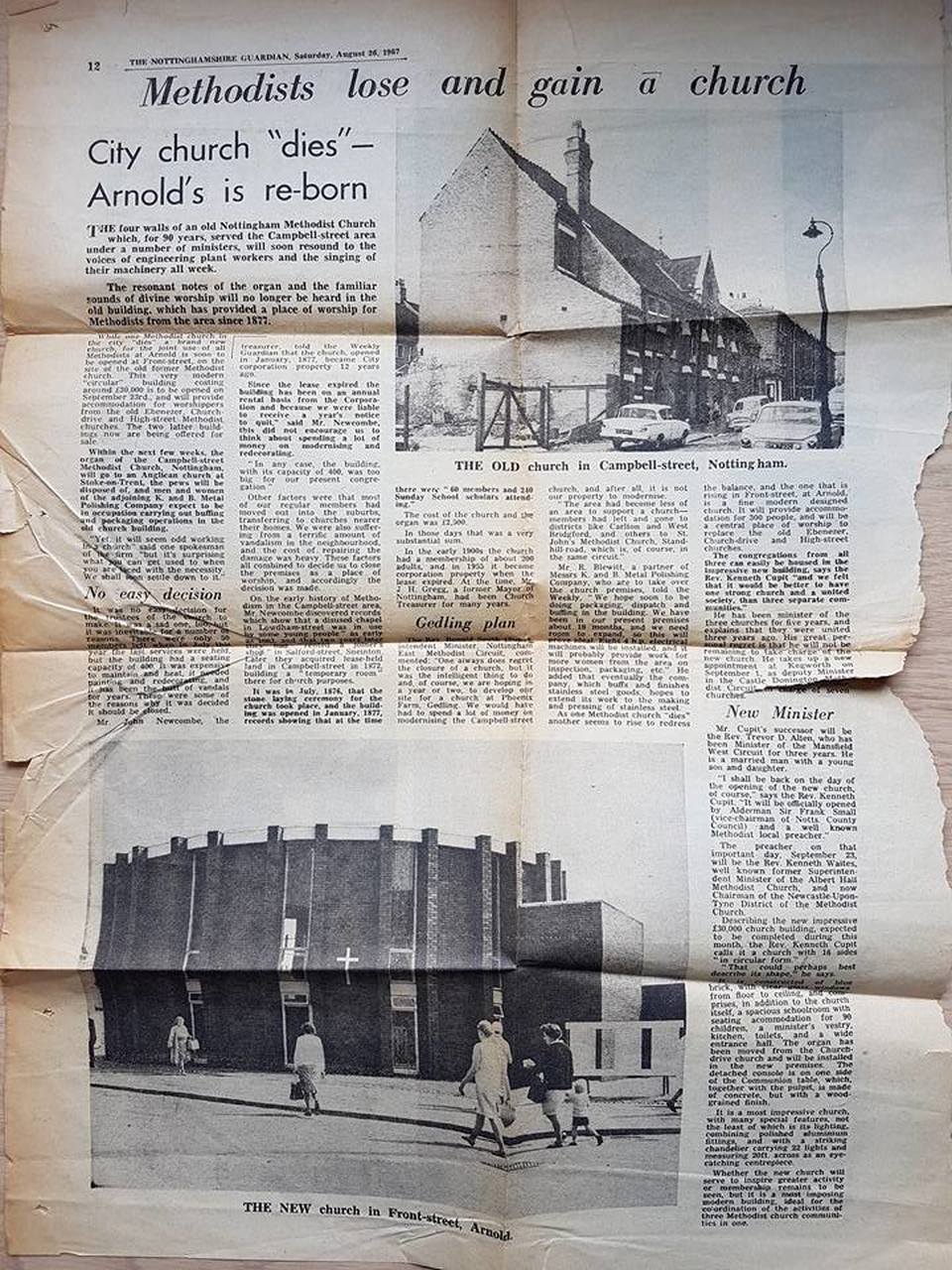 holy trinity
​trinity square
In 1841 Holy Trinity (Trinity Square) was built on land in Burton Leys enclosed in 1839. It cost £10,000. By 1851 Holy Trinity had the largest congregation in Nottingham (1150). The original congregation was drawn from the Charlotte Street area, one of the poorest districts in the town, demolished at the end of the nineteenth century to make way for the Victoria Station. The site of the day schools provided by the church was compulsorily purchased and the money spent on a parish hall in Colville Street. The 177 ft church spire became unsafe after it was damaged by air raids in 1940 and it was removed in 1942. The church closed in 1956 and was demolished in 1958. (credit: http://mapperleyandsherwoodhistorygroup.co.uk/the-history-of-anglican-parishes-in-nottingham) 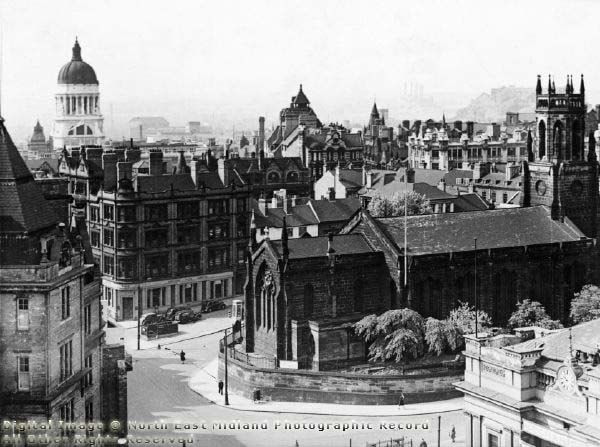 Catholic Apostolic Church ​
​Northumberland St
Built as a Methodist Church, the foundation stone was laid in 1863 and the building opened on 18 October 1863, named the 'Independent Methodist Church'. In 1870 the chapel was sold to the Catholic Apostolic Church, who remained there until 1951 when it was purchased by the Roman Catholic Church and dedicated on 15 October 1951 for the use of Ukranian Catholics. The building was demolished in 1970.

source: https://picturenottingham.co.uk/image-library/image-details/poster/ntgm010642/posterid/ntgm010642.html
Catholic Apostolic Church
​Northumberland St
st pauls
​George St
St Paul’s Church, George Street, Nottingham was opened in 1822, the first of several daughter churches of St Mary’s, High Pavement. At that time, the parish of St Mary’s extended over 2700 acres of the town, most of which was open farm land. The two churches were only one third of a mile apart, with St Paul’s serving as a chapel-of-ease to St Mary’s in a district where housing and factory development was taking place. Parish status was conferred in 1839.
The church was designed by William Wilkins in the classical Palladian style to accommodate a congregation of 1,365, but soon after opening the vicar complained about the number of empty pews and by 1851 the congregation had fallen to about 700 (including Sunday Scholars). With seven other Anglican churches and at least ten nonconformist churches and chapels all within less than one mile radius of St Paul’s this was not perhaps surprising.
The church was remodelled in 1894 which reduced the seating to 700. Over the next fifty years, as Nottingham expanded into the surrounding countryside, the number of houses and people living in the parish slowly diminished. Many of the houses were replaced by commercial buildings. Although three of the four George Street church buildings are extant, only one, the Methodist church, continues to serve its original purpose.
In 1924 St Paul’s was closed and it was demolished in 1925. 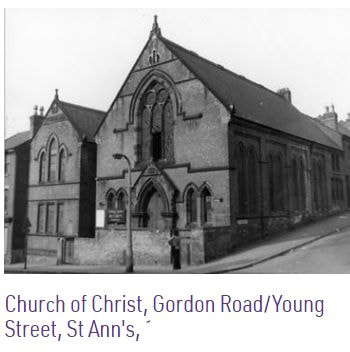 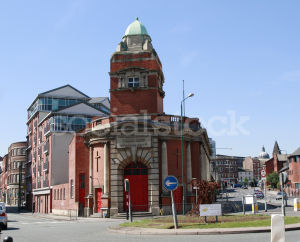