Captain Vickers was awarded the Victoria Cross on 14 October 1915 (his 21st birthday) in the Hohenzollern Redoubt for the following action:

"When nearly all his men had been killed or wounded, and with only two men available to hand him bombs, Captain Vickers held a barrier for some hours against heavy German bomb attacks from front and flank. Regardless of the fact that his own retreat would be cut off, he had ordered a second barrier to be built behind him, in order to ensure the safety of the trench. Finally, he was severely wounded, but not before his magnificent courage and determination had enabled the second barrier to be completed."

Captain Vickers survived the First World War and went on to serve as a lawyer, administrator, writer and pioneering systems scientist.

During the Second World War, he served as Deputy Director General at the Ministry of Economic Warfare, in charge of economic intelligence and a member of the Joint Intelligence Committee.

He received a knighthood for his services 1946.

The Sir Geoffrey Vickers Memorial Award has been presented by the International Society for the Systems Sciences every year since 1987 in his memory. 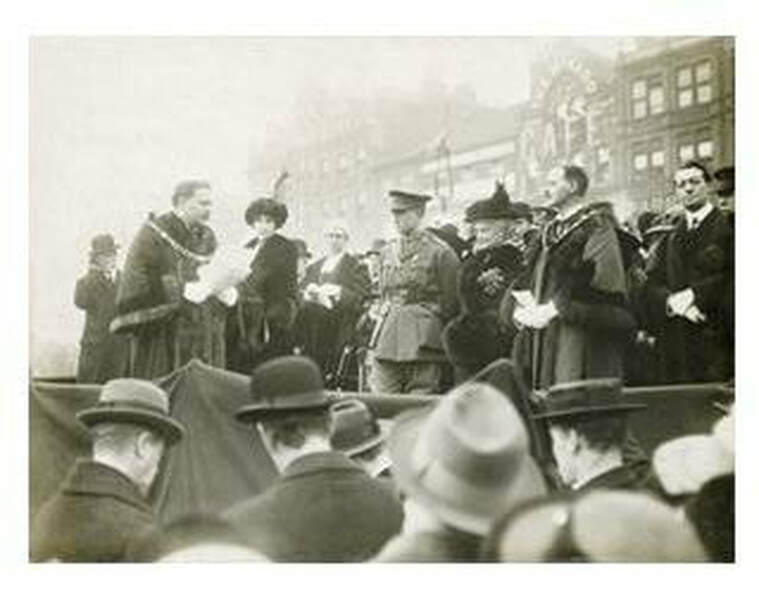 'Charles Geoffrey Vickers was born on the 13th October 1894, the son of Charles Henry Vickers, lace manufacturer. He was educated at Oundle School, Northamptonshire, where he excelled at sports, representing his school at Rugby. On leaving school he spent several months in Germany studying the language before entering Merton College, Oxford in October 1913. While at Oxford, he won a classic exhibition and was reading for honours in moderations and Greats.

He also served with the Officer Training Corps. In September 1914, shortly after the outbreak of the First World War he obtained a commission into the 7th Battalion The Nottinghamshire and Derbyshire Regiment (Robin Hoods) and was posted to France in February 1915. He was involved in the fighting at Ypres and the battle of Loos but it was at the Hohenzoltern Redoubt on the 14th October 1915 that Captain Vickers was to win his Victoria Cross.

His Citation read 'For conspicuous bravery in the Hohenzoltern Redoubt when all his men had beer killed or wounded and with only two men available to hand him bombs, Captain Vickers held a barrier for some hours against attacks from the front and flanks. By ordering a second barrier to be built for the safety of the trench, he knowingly cut off his own retreat. He was severely wounded but saved a critical situation.' The award was Gazetted on the 18th November 1915.

He was decorated with his Victoria Cross by King George V at Buckingham Palace on the 15th January 1916. On his return to Nottingham he was given a civic reception and presented with a gold watch in front of a large cheering crowd in the Market Square. He was promoted to Major and transferred to the 1st Battalion The Lincolnshire Regiment. During his service with the regiment he was again wounded and won the Croix-de-Guerre. (Belgium).

After the war, he qualified as a solicitor and practised with the firm of Slaughter and May. He continued his sporting interests and was a fine yachtsman coming second in the prestigious Fastnet Race.

At the outbreak of the Second World War he was commissioned with the rank of Colonel and was 'specially employed.' He became Deputy Director General of the Ministry of Economic Warfare and was put in charge of economic intelligence and was also a member of the joint intelligence committee to the Chief of Staff.

At the end of the Second World War he continued to practice law and was Knighted in 1946. He played a major part in the foundation of the Mental Health Research Fund contributing much to the development of British psychiatry and became an honorary Fellow of the Royal College of Psychiatry. He sat on many boards and committees and was held in the highest regard by all who knew him. He also published 50 papers and six books on management theory and practice.

Sir Charles Vickers finally died on the 16th March 1982, at the age of 87. His Victoria Cross and campaign medals are now on display in the Regimental Museum at Nottingham Castle.' Taken from 'For Conspicuous Gallantry' by Nigel McCrery, published 1990
Proudly powered by Weebly