GEORGE SLEAFORD
My dad George Sleaford in uniform for the "They served" page.
​I've added three to show how quickly he matured through the war years, just as all the others had to of course.
The first one shows him as a raw recruit in October 1940, approaching his 17th birthday.
The second is April 1943 on leave in Cairo and the third is March 1946 when he'd be 22 (a few weeks before "demob").
The third photo was taken at Van Ralty studios in Nottingham.
We have the "official" framed copy with a citation at the bottom that reads
"North Africa: El-Alemein - Tunis. France-Belgium-Holland-Germany 1940-1946".
He served with the Sherwood Foresters at first before a transfer to the Notts Sherwood Rangers Yeomanry in 1942.
ARTHUR REGINALD BISH
Cyril Swanwick

A Christmas greeting from a St Ann’s boy
This was a Christmas card sent in 1942 from Cyril Swanwick to his parents (my grandparents) living at Twells Street off St Anns Well Rd. He was sadly killed April of the following year, I think these cards were on sale to help the war effort, as he wasn’t in the RAF but rather the Sherwood Foresters.
I would like to send this card to all of you “with Best wishes for Christmas and the coming year”  ...Paul Henson 21 Dec 2012
CWG Record here
KENNETH WAGSTAFF
of Westminster St
​killed in action Holland 1944 3 days before his 19th birthday 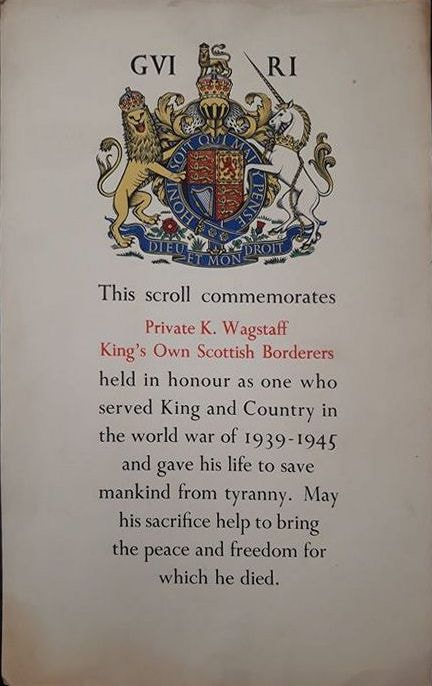 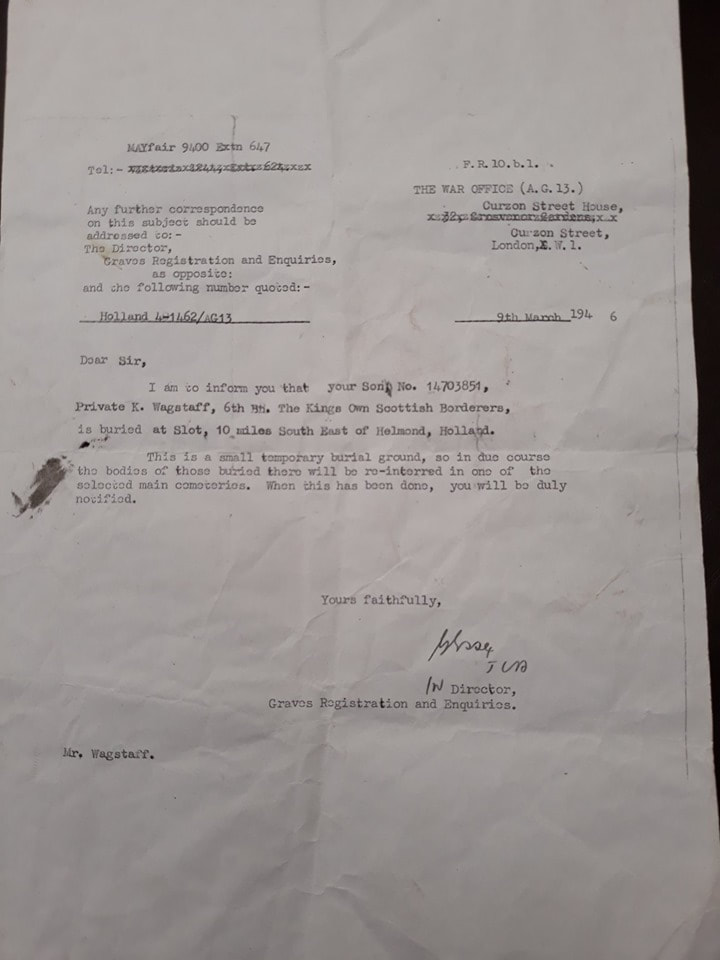 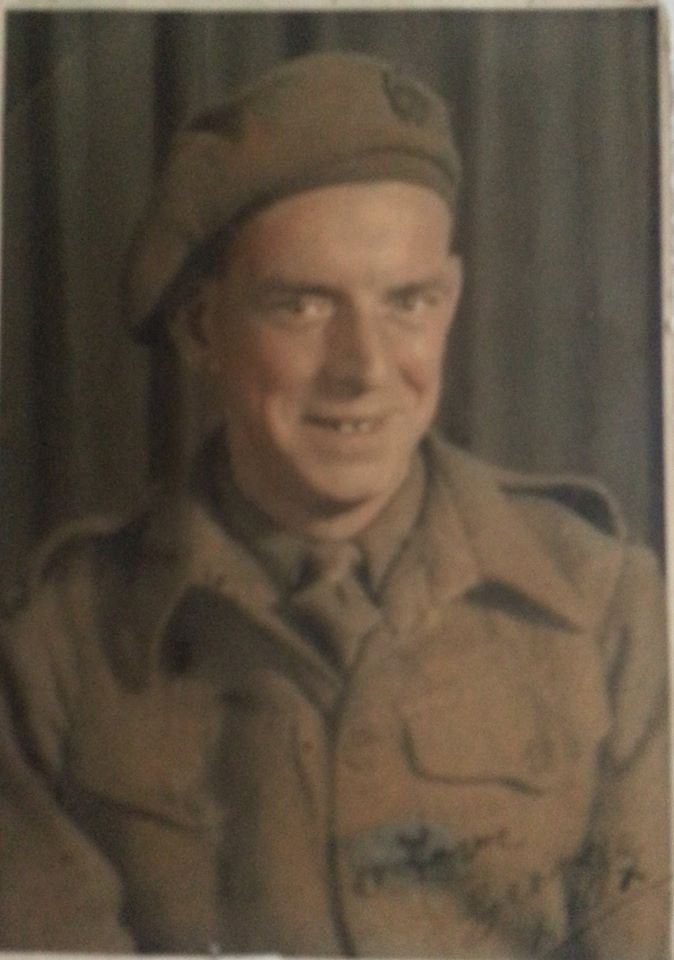 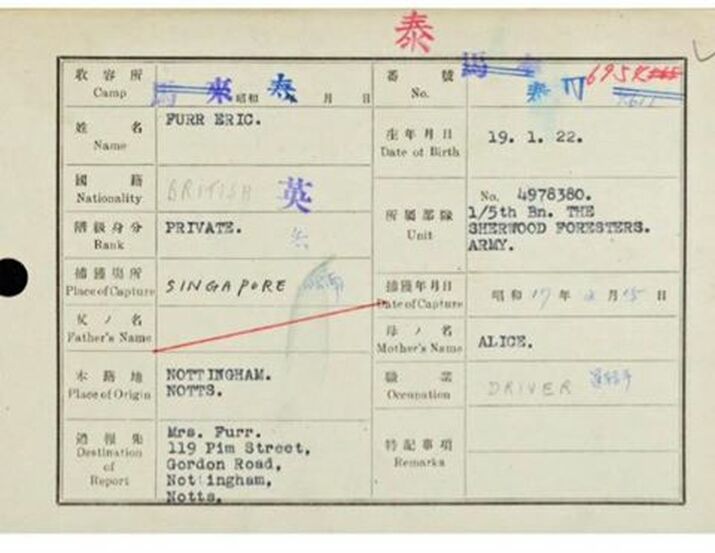 ALBERT CLEMENTS
Albert Clements, who I believe was a milkman, was first husband of Irene (nee Sharp) of 360 St Ann’s Well Road. He died in Rugby Hospital 11.09.44 from war in France injuries. Irene later married Frederick Vernon Radford on 5.9.46 who had been a prisoner of war in the Far East.﻿​  (Chris Moakes) 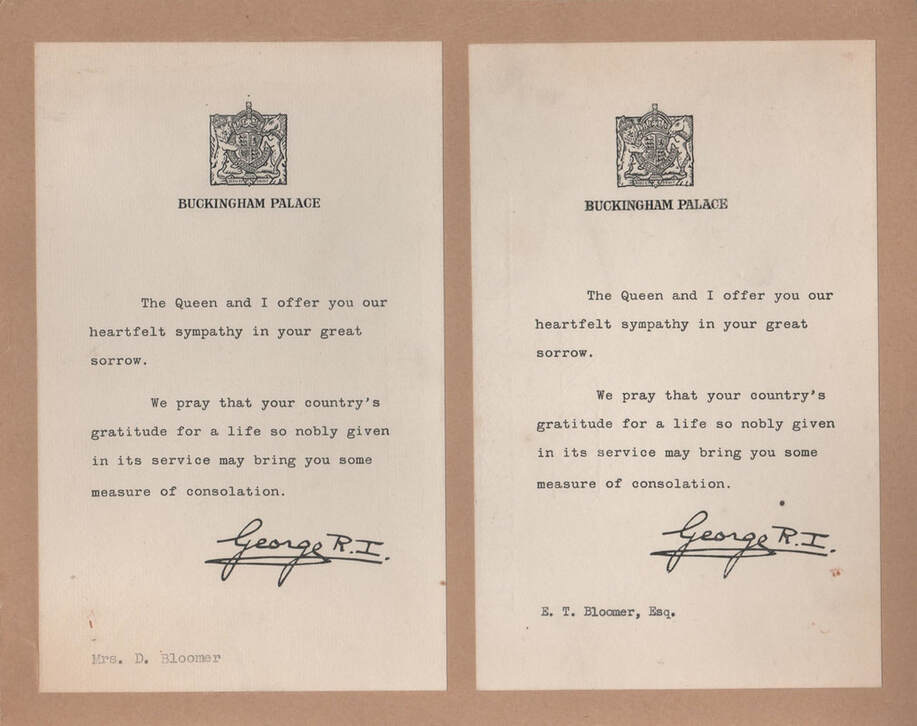 ​In memory of two uncles lost to the folly of man and all those Christmas presents they meant to send.... Steve Bloomer 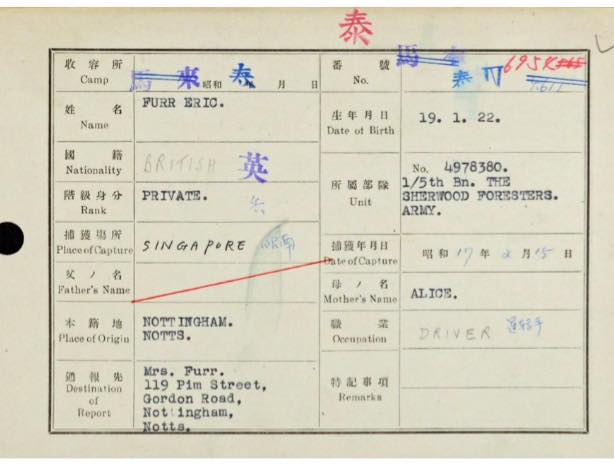 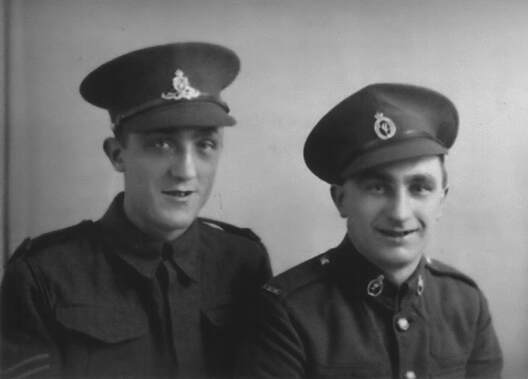 ​On the left , Stan Coker, my uncle and on the right, my father William Coker both of Campbell Grove , 2nd WW.    Rex Coker
Harold Sleaford 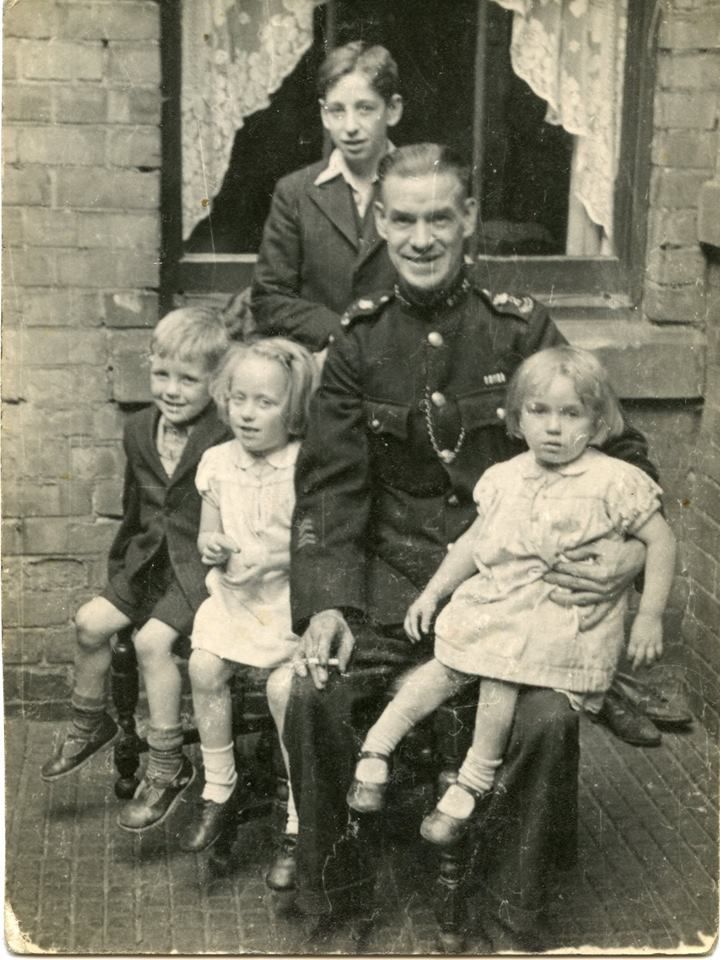 My Grandad Harold Sleaford in his wartime Special Constable uniform. My uncle Ray at the back and my uncle John on the far left.

The two girls are Maureen & Sylvia, daughters of my aunt Jess, who was the eldest of four children.

My dad George Sleaford was next eldest & he would have been somewhere in Europe with the tanks of the Sherwood Rangers at the time. I think my Grandma took her shoes off to take the photo (see bottom right)!

This window provided the backdrop for loads of our family portraits. 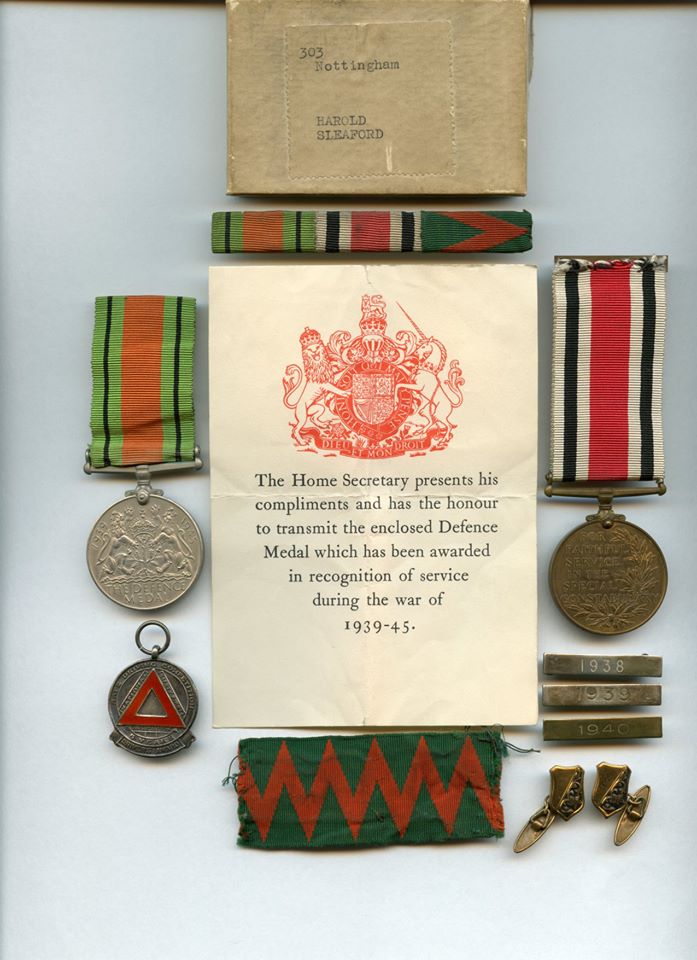 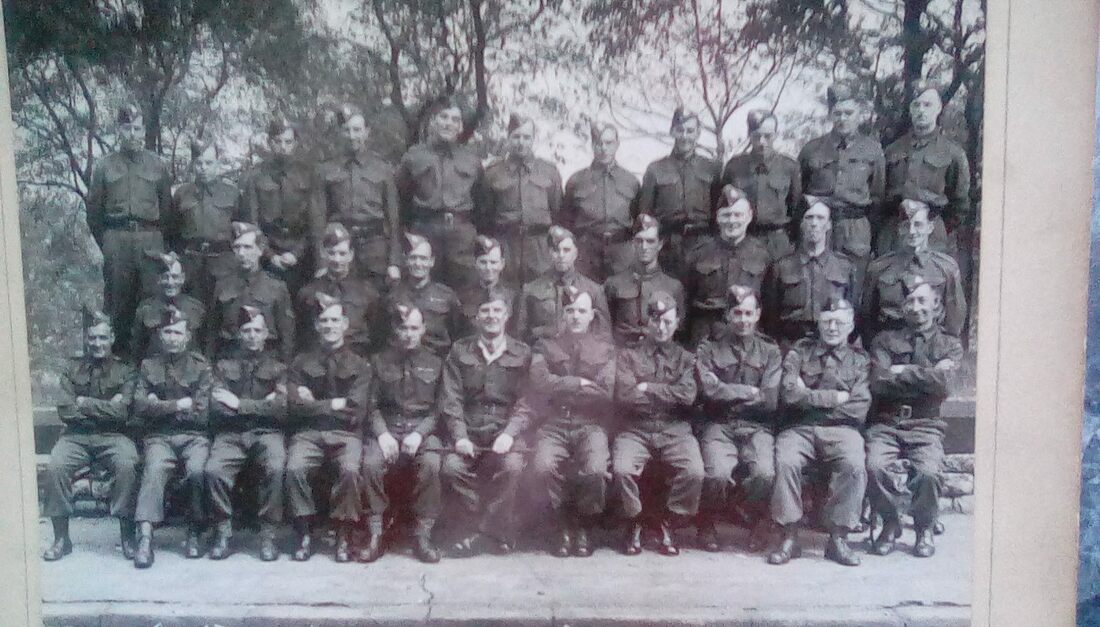 Home Guard. I think on Gregory Boulevard, looks like The Forest in the background. My dad is extreme left, back row
.....Graham Breeze 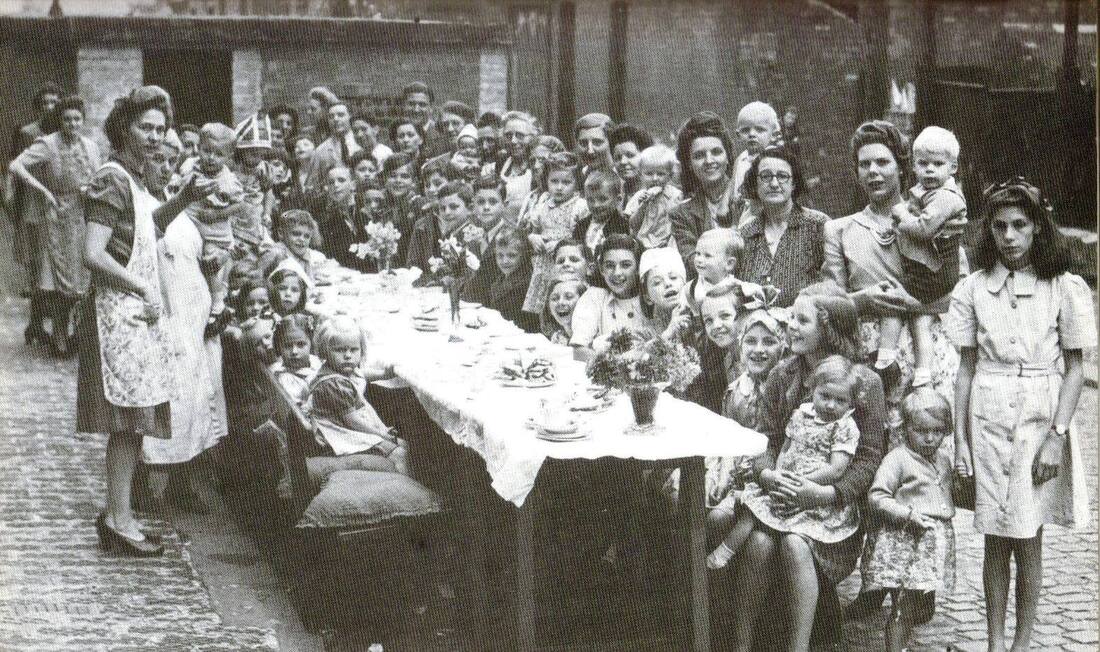 VE-Day (Victory in Europe Day), Tuesday 8th May 1945. Picture taken on Young Street, looking SE past the junction with Flewitt Street, and over an air-raid shelter. A slight variation of the picture appeared in the Evening Post, cropped differently. I have a copy but I don't know the edition. Anyone know?
​...Tony Proctor
Nottingham Blitz
There were 11 bomb attacks in Nottingham during the WW2, and only one of them was considered serious, if compared with other cities in England. The worst attack occurred on May 8th and 9th of 1941, with a total of 159 people killed and hundreds injured. There were 95 aircraft attacking Nottingham, but some of them were diverted from the city by the RAF false signal and intentional fires in waste ground away from both Derby and Nottingham created to fool the enemy, where the only casualty was livestock.
But there were still a great damage, all across the city, from the edge of Mapperley Park to The Meadows. The places worst hit were in London Road, Sneinton, Colwick Road and Carlton Road, although the place where more casualties happened was at the Co-op Bakery in Meadow Lane, a total of 48 people died and 20 were injured. There was a memorial plaque remembering the deaths at the bakery, but after the site was sold the plaque was moved to the Wilford Hill Cemetery.
The table below shows some of the locations hit with more information on how it happened, and we can see that the losses of that day were many. The Nottingham Blitz was not the most heavy attack that Britain received during this time but the impact was severe.

It's 8 May 1945 VE Day and somewhere down there in Old Market Square is my father Gordon, 12 years old and enjoying the moment!
...Steve-Beq Clark
Proudly powered by Weebly