The Hunger Hills are first mentioned in 1304 when the name meant "the land on the hill" or "hanging land". ​ 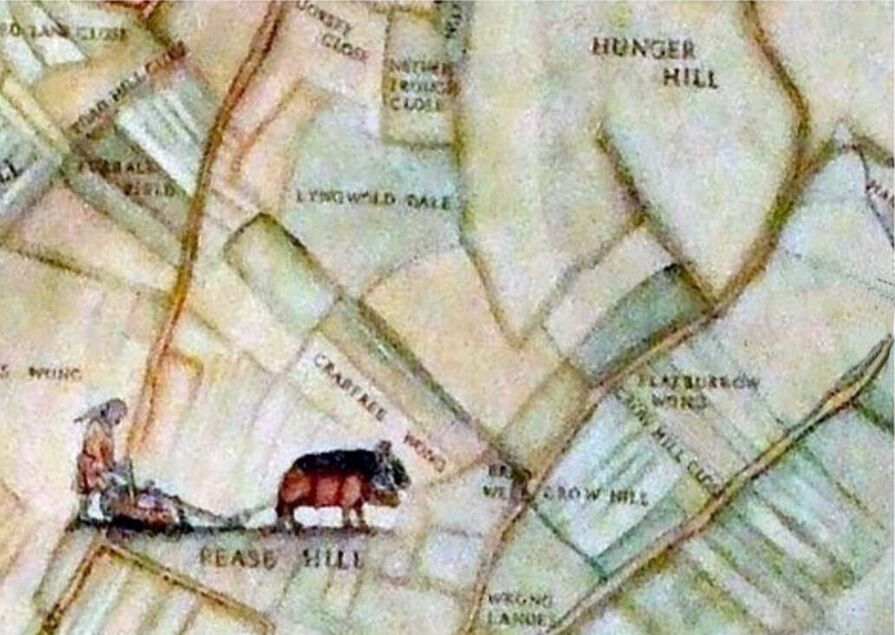 One of the most interesting features of this earlier time was St Ann's Well. Its water was supposed to be the second coldest in the British Isles and had the reputation of being able to heal sore eyes. The young folk would gather bluebells, primroses and violets there. It was situated in a coppice about where the railway later crossed. Beside the well there was a public house and a green.

​Near the well there may have been a Chapel dedicated to St. Ann. In the middle of the eighteenth century the citizens of Nottingham would consider a walk to St. Ann's Well a pleasant country stroll for at that date the land outside the town was all countryside.

A stream ran from the well down to the "Spring" as it was locally known, being at the bottom of Coppice Road, later to be known as  Ransom Road.  Water from the well fed a beck (stream) that ran through to the river. By 1851 the well was said to be dilapidated. 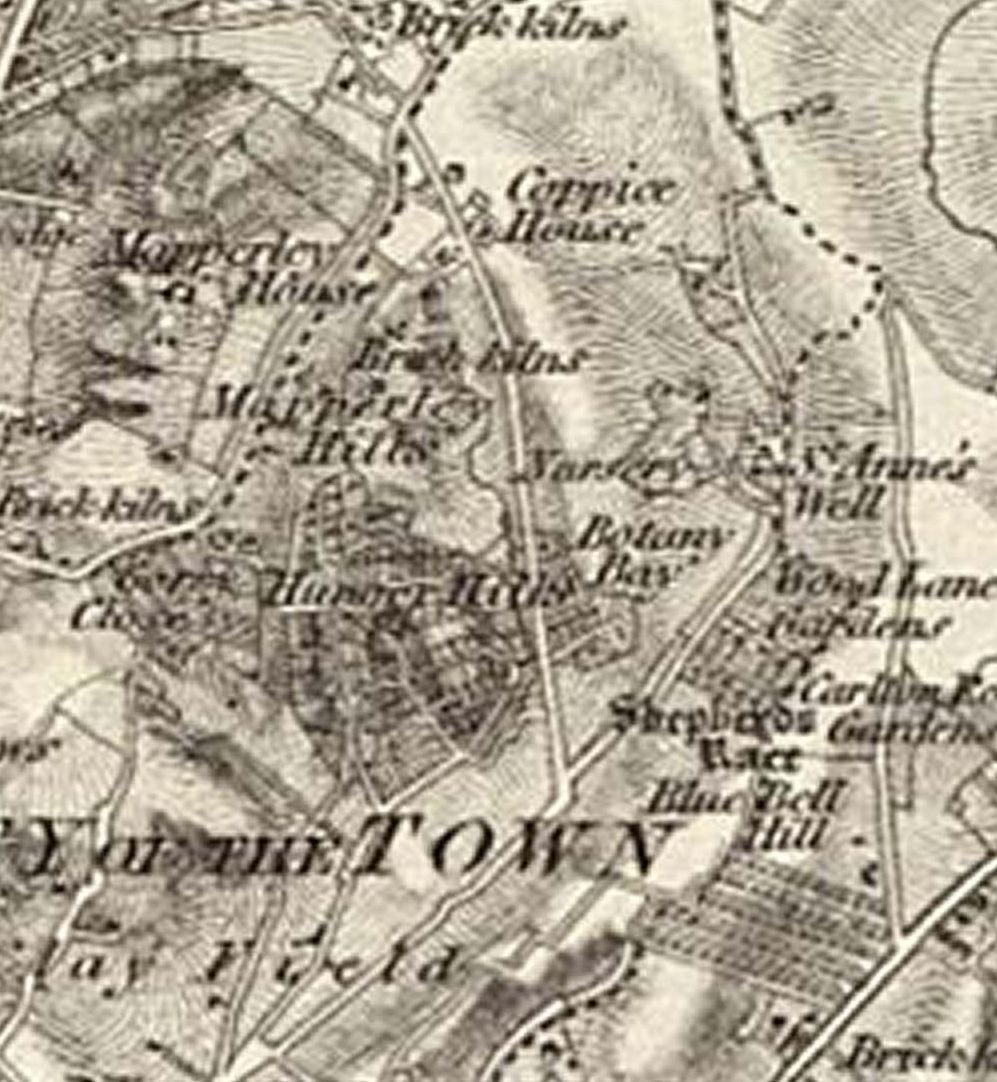 From the bottom of Coppice Road and up to Mapperley were gardens and the Rifle Range (the Butts) where the local Volunteer Regiment did their firing practice.
​ 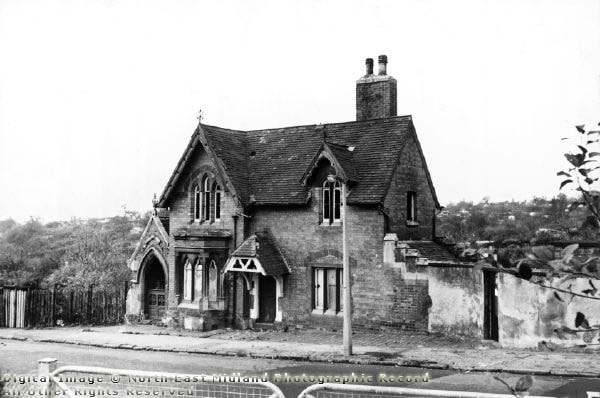 Coppice Road rose northwards while Donkey Hill (St. Bartholemew's Road) rose southwards up a very steep narrow piece of land which led on to the "Pad Road wheat fields". This path went right through to the village of Gedling. 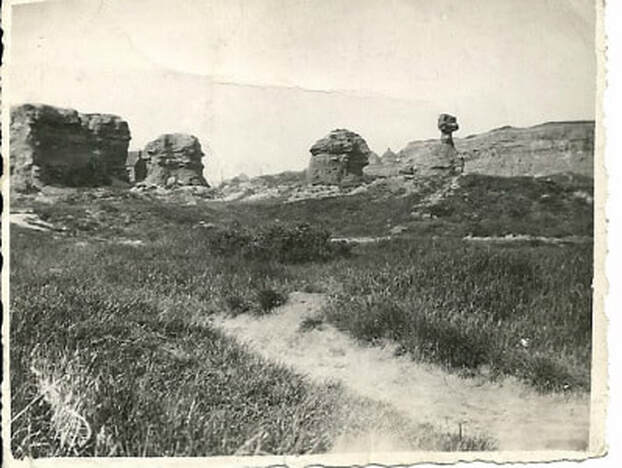 Nearer to town, a cab rank stood on Corporation Rd where hansoms and other cabs plied for hire. On the left side of  Robin Hood Chase was a brickyard where the clay was dug and made into bricks.

St. Ann's Well Road was paved with rough granite sets. If horse-drawn buses, with their iron-rimmed wheels, clattered by during the services in the chapel there was no  "peace, perfect peace"!

In 1845, like other parts of the Borough of Nottingham, the area was enclosed under an Act of Parliament of that year and was made available for development, allowing people to build houses on the Clay Field (old name for St. Ann's). Considerable building development took place to house the workers needed for the new factories on which Nottingham's prosperity was based. This was completed by the 1880s. Streets were laid out in straight lines, no doubt in order to include as many houses as possible  -  about forty an acre. 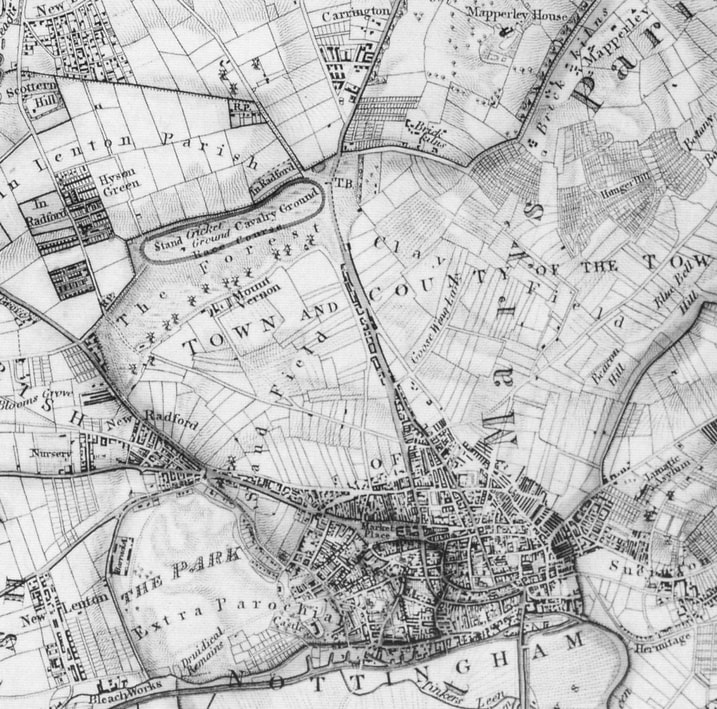 The map extract above from George Sanderson’s ‘Twenty Miles Around Mansfield’, published in 1835, gives some idea of the density of development and overcrowding which Nottingham suffered from prior to the enclosure of the fields around the town. Also visible are the Sand Field and Clay Field which were enclosed to the north of Nottingham.
source  http://www.ng-spaces.org.uk/nottingham-enclosure-act-1845/ 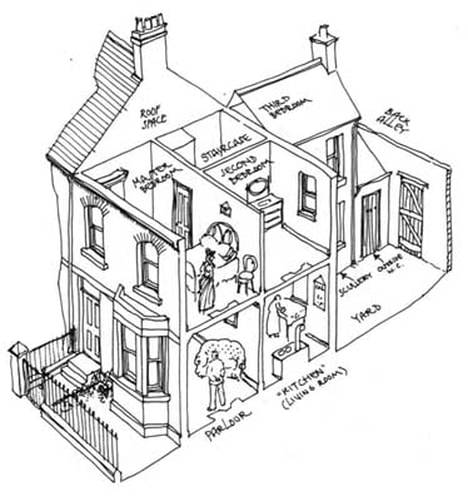 Most of the houses were of the same type and size, small houses intended for lower-paid working classes. They were plain-fronted and the street door usually opened directly into the parlour. Behind this was the kitchen and beyond that commonly a small scullery.

There was a small back yard reached via a back entrance. The water closet and sometimes a coal cellar were in the yard. On the first floor there were two bedrooms and above these was a fifth room which was sometimes an attic lit by a skylight.
The following extracted from Picture the Past www.picturethepast.org.uk/

"The development of the St Ann's actually began as early as 1750 when Charles Morley, Sheriff in 1737-8, manufactured brown earthenware very prosperously in a small factory in Beck Street, his speciality being his brown beer jugs (Beck Street lies off Bath Street prior the St Ann's Well Road roundabout).

The construction of Saint Ann's, proper, began in early 1839 when the individual Clay fields, covering a relatively small area, were divided up into plots (Enclosures, and a general layout was proposed.

This included Corporation Oaks, a grand tree lined recreation walk leading from St Ann's Well Road to the top of Toad Hill, with large houses for doctors, solicitors, and factory owners, lined up on either side.

The parochial glebe lands could not be built on without church permission, and these formed the relatively untouched Sycamore Park together with its woodland, Hungerhill gardens, and Gorsey Close gardens.

At the end of the construction period there were a total of 10,000 back to back terrace houses in Saint Ann's, which were mainly of a standard type intended for the lower paid working classes.

There  was also a total of about 25 public houses, almost one on every corner of the street (each one catering for 400 local residents), including: Coachmakers Arms, The Oliver Cromwell, St. Ann's Well Inn, Westminster Abbey Hotel, and the Peverill, to name only a small number.

These were supported by a number of beer off-licences.

Trams and the railways arrived to serve the new development. Unfortunately, because of the construction of the London, and North-eastern urban railway through St. Ann's, its famous well, which gave the region its name, was lost. Before its demise in 1887, Nottingham Borough Council constructed a monumental structure over it, designed by the town planner, and surveyor Marriott Ogle Tarbotton, but this monument was broken up.
​
By the time of the demolition in 1970  there were 10,000 houses in Saint Ann's with the majority being 100 years old."