ST ANN'S WELL ROAD PRE DEMOLITION (1970) WEBSITE
link - plowright press
THE VIRTUAL WALK - click here
Inner city voices by Ruth I. Johns was published in 2002.
ISBN-13: 978-0951696095
“Ruth Johns’ study of life in St Ann’s, a low income neighbourhood in the heart of Nottingham is in some ways a typical inner-city story, tracked over many years, in a way that brings to mind other authentic accounts of communities under pressure such as Bethnal Green in East London, the Gorbals in Glasgow or Hulme or Mosside in Manchester. Yet this study is unique for the huge range of people who are given voice, for the detailed on-the-ground accounts of community life in people’s own words – from the perspective of the school teacher, the vicar, the pub owner, the old lady, the grandmother, the young mother, the single man and many others...There are several crucial messages that we can all take from this fascinating and profound book..."

Anne Power, Professor of Social Policy, London School of Economics and Political Science, writes the foreword to the second edition. 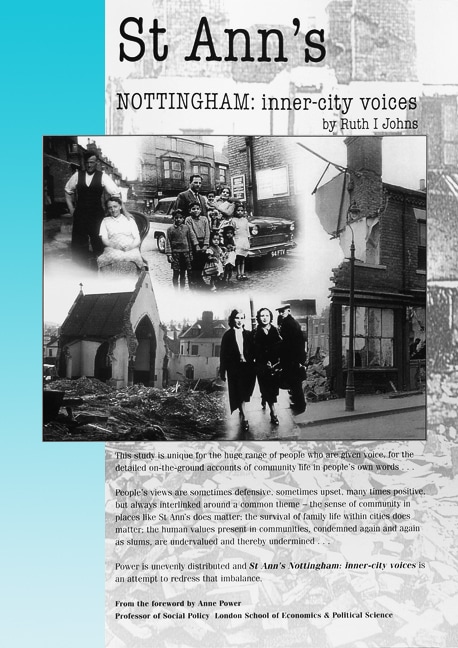 Quest for missing links Ruth Johns, guru of real-world regenerationIn the introduction to her new book on the St Ann's district of Nottingham, Ruth Johns ponders a question that has intrigued and taxed any number of social commentators: "Why is it that, with better educational opportunities, a greater understanding of childhood needs, homes with modern labour-saving devices, and less extreme poverty, we are experiencing so many children deemed 'problems'?"

Part of the answer, she believes, lies in the way areas like this were redeveloped. In St Ann's, it happened more than 30 years ago. The bulldozers swept away much Victorian red brick - and with it went what she calls "usable dollops of neighbourhood public space" and the "cement" that bound children to their communities.

"There is that vital extra dimension of 'belonging' to the place where you grow up, and where you are known to many people of all ages," Johns writes. "People you meet frequently and with whom, over time, you develop relationships with two-way responsibilities and support."

Her weighty work of community history and analysis, 537 pages thick, is partly a response to a visit she made to a local comprehensive school. She recalls: "Talking to some of the teenagers there, I found that they knew nothing of the history of their own area. They had no shared story, no sense of identity."

Born in London and brought up in the west country, Johns moved to St Ann's as a young woman in 1965 and soon felt at home. "I grew to love the place," she says. She joined the fight against wholesale redevelopment, a battle led by the St Ann's Tenants and Residents' Association under the colourful chairmanship of writer and broadcaster Ray Gosling.

What the locals wanted was a much more selective approach: getting rid of the slums while holding on to some perfectly good buildings, such as many of the 650 small shops and 56 pubs. What happened instead was exactly what occurred in similar communities up and down the country. "Around 30,000 people were compulsorily moved," says Johns. "Some 340 acres were cleared, including many buildings of considerable architectural and social interest."

At the time, she ran the Family First Trust, a pioneer housing and community self-help organisation. It was the beginning of a distinguished career in public service. She was also a founder member of the National Pre-School Playgroups Association. In 1976, she moved to London to become national director of the action resource centre, advising government and large companies on how they could support community initiatives in 13 cities. As finding employment for young people became an increasingly critical issue, she wrote the outline of the initiative which became the Prince's Trust.

"For my sins, I get lots of ideas," she says, sitting in the corner of St Ann's library after delivering another batch of her books. Local people can buy them at a substantial discount and there would appear to be no shortage of interest. One man approaches our table with the deference he might bestow on a visiting celebrity author. "Would you mind signing my copy?" he inquires, diffidently.

Outside, dusk is gathering over the shopping precinct, where every retail unit is occupied, their lights casting a warm glow over the stylish neighbourhood centre. For a moment, it seems difficult to grasp that St Ann's is known throughout Nottingham as "crack city" or the "wild west" because of the high incidence of drug-related gun crime.

Johns concedes that the current generation of city councillors has tried to make amends for some of the mistakes of the past. "They've spent millions on improving the housing stock and the surrounding environment," she says, as we take a tour around hilly streets. By and large, the streets are made up of uniform rows of terraces, built by Wimpey for the council in the late 1960s and early 1970s. A few Victorian survivors, occupying the high ridges overlooking the valley, are in multi-occupation, mainly by students.

Johns has a small flat where she stays for two or three days every week. The rest of the time she spends at home in Warwick with her second husband, Walter, who was "in industrial relations" at Courtaulds Textiles.

She could be forgiven for settling for comfortable retirement in a pleasant, middle-class area - particularly as, more than 15 years ago, she had to fight a long battle against a muscle condition and subsequent paralysis. "I was told I'd never walk again," she says. Not only has she defied that diagnosis, she has spent much of the last three years slogging around the steep streets of St Ann's, recording the life stories of many of its residents. With a few notable exceptions, such as Gosling, they are people who have never had a voice of their own. Johns feels passionately that they should have their say.

She says: "When I was in London, talking to people who run the country, I realised they had no comprehension of how life is really lived. If some of those consultants who get paid millions to plan our inner cities sat down to read this book, perhaps they'd have a better idea."
source acknowledgement: http://www.theguardian.com/society/2002/dec/11/regeneration.communities
From the archives:
"Fundraiser of the week - Ruth Johns September 15, 2017
Our fundraiser of the week is Ruth Johns, who has donated the proceeds from her book St Ann’s Nottingham: Inner City Voices, along with Tony Miller, founder of the St Ann’s Well Road Pre-Demolition (1970) Online Community.
Due to a muscle condition, Ruth was told she would never walk again. However, she overcame illness and spent years recording the life stories of residents of St Ann’s Well Road, which has now been demolished.
Donations were raised by selling the last remaining 20 copies of the book online. Tony, who organised selling the books online, said "we thought it best that we go back to Ruth and ask her which charity she would prefer the money to go to and she said Action for M.E. without hesitation."
We would like to thank both Ruth and Tony for their kind support."
www.actionforme.org.uk/news/fundraiser-of-the-week-ruth-johns/