Camel coat and lovely voice,
designer waistcoat, shirt of choice.
The Ted, enjoying rock, he rolled.
His gnomes, he roams, the stories told.
Bankrupt, bank down and all that muck.
Some work, no work, dig deep, notebook.

The walks, his talks, great memory, care.
His looks and books, yes... he would dare.
'Look up, see here. Hello, who's that?
Don't fall, lets stop... have a chat.'
Some wit, some shit, the time he took,
Outcast, out, in, who cares? notebook.

http://en.wikipedia.org/wiki/Ray_Gosling
Looking through a few messages and cuttings
that I had from RayGosling over the years
and my book he signed . I thought I’d add them
so they could probably go on his page...Jean Taylor 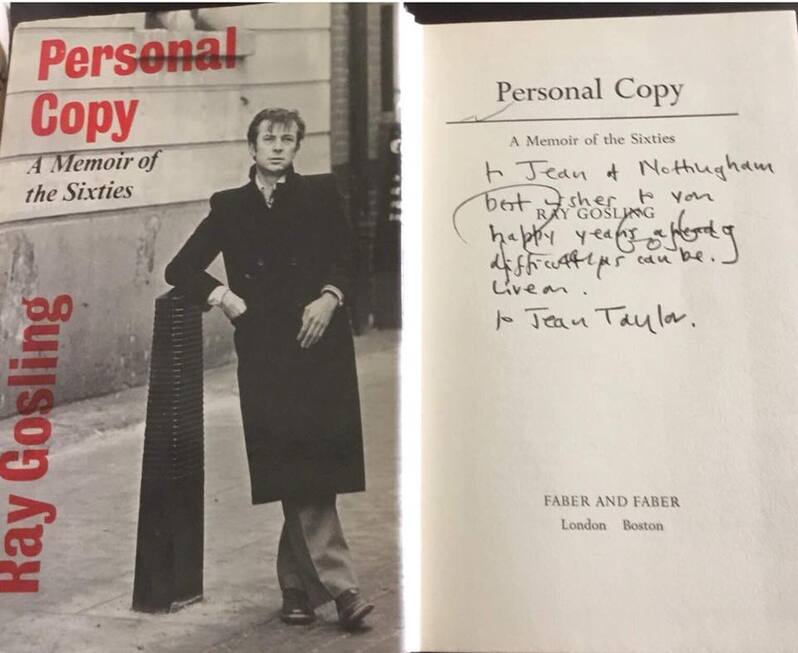 Films about people and the places they lived. He wrote like he spoke. Direct. Said what he saw.

Said what he thought. Not always what the rest of us do. Sometime it would leave you not knowing where to look.

For a great communicator that he was in words and on the telly the best way of getting hold of him was by postcard. He never got to grips with picking up phone messages. Or indeed paying phone bills.

He was always short of cash. The film on his bankruptcy brought him to our attention on Inside Out. We checked out a film he did comparing Nottingham and Leicester in the early 1960's. It was called Two Town Mad and unlike anything we'd seen before. And done by a young man in his early 20's. So we got him to do it again for us over forty years on.

We had six years working with Ray. All the films touched on the way we live. That people word again. One on buildings and sculpture sticks in the mind as Ray in his long camel coat would walk around Nottingham pointing and shouting "Look up. Look up." Do. It's great advice.

Ray wrote everything down. Everything he found interesting. If funny he would chuckle as he jotted it down into his notebook. Always had a notebook. He would use a cheap one too. Nothing fancy. He turned his nose up once at the gift of a nice hard back one because he said it would do him a mischief if he fell over and landed on it. Ray was great at documenting life in these books. He didn't throw much away.

We always wanted Ray to make his own obituary film. Those discussions were inevitably in a cherished pub. But don't believe what you may have read about a 'Boozy session'. Ray had had one drink and I don't. The talk about death led to the film where Ray made the false claims about killing a lover to end his friends suffering. He had several chances to remove it from the film but stuck to the story which ended his TV work.

Why did he do it ? After his arrest he was bailed to my house to avoid the media scrum. When he told the truth I was at first angry inside. And then sad. He was sitting in front of me his career over. For once no straight answer as to why he had done it. But that night did see an explanation of sorts. At his friends funeral he said he was harangued for not ending the suffering sooner. So for the next thirty years he told himself and believed himself that he had.  He had wanted to do the right thing and to have been seen to do the right thing.